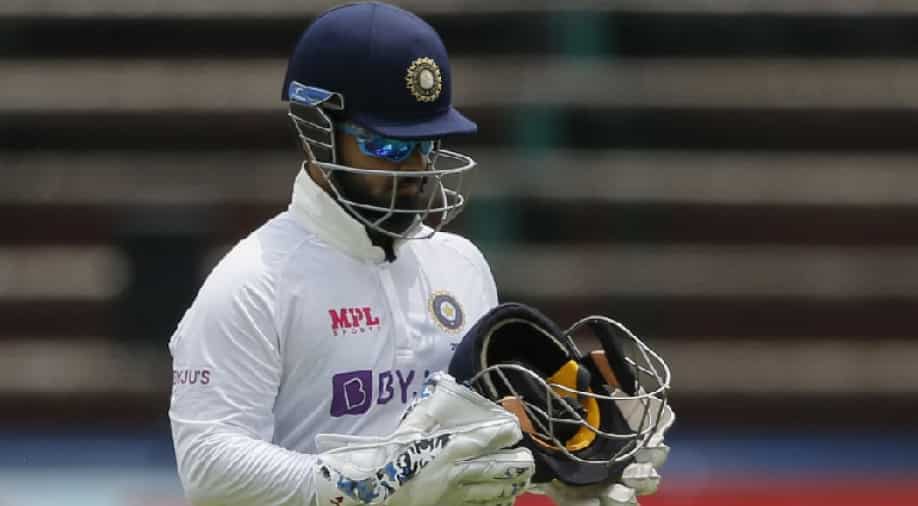 Rishabh Pant has 100 catches to his name in Test cricket. Photograph:( AFP )

Indian wicket-keeper Rishabh Pant on Tuesday achieved an elusive feat in the ongoing second Test against South Africa as he joined former India captain MS Dhoni in an elite list.

India wicket-keeper Rishabh Pant achieved an elusive feat in the ongoing second Test against South Africa at The Wanderers in Johannesburg on Tuesday (January 04). Pant etched his name in history books as he became the fourth Indian wicket-keeper to complete hundred catches in Test cricket, joining MS Dhoni in an elite list.

Pant achieved the feat on Day 2 of the second Test as he completed 100 catches after taking Lungi Ngidi's catch which also brought an end to South Africa's second innings. Pant took Ngidi's catch off Shardul Thakur's bowling to reach the 100-catch mark in Test cricket joining Dhoni, Syed Kirmani and Kiran More in the list of Indian keepers with 100 or more catches in Test cricket.

Pant is the 42nd wicket-keeper overall to reach the milestone of 100 catches in Test cricket. Dhoni has the most catches by an Indian wicket-keeper in the longest format with 256 catches to his name. He is followed by Syed Kirmani (160) and Kiran More (110).

Pant now has the 4th highest catches for India in Test cricket and the left-handed keeper has achieved the feat in 26 Tests as he continues his prolific run behind the stumps. Pant has been in fine form as a keeper and has also been brilliant with the bat for India in the last couple of years in the longest format.

Talking about Day 2's play, Shardul Thakur picked up an impressive seven-wicket haul to run through the South African batting line-up in Johannesburg. India bundled out the hosts for 229 runs before posting 85/2 at stumps to take a 58-run lead in their second innings of the second Test.

India will be looking to extend their lead on Day 3 and post a strong target for the hosts as they stand one win away from clinching the three-match Test series.