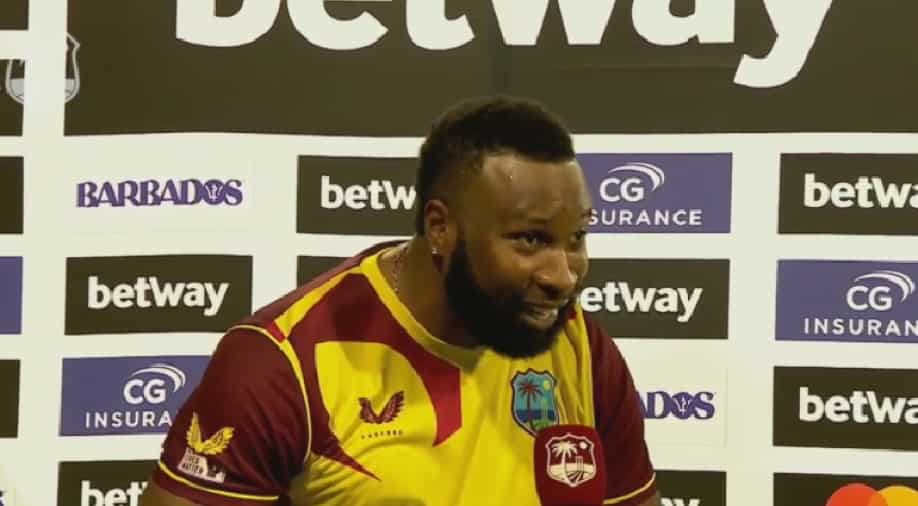 West Indies skipper Kieron Pollard started his post-match interview by singing after his side beat England by 17 runs in the 5th T20I to clinch the five-match series 3-2.

West Indies defeated England by 17 runs in the final fifth T20I on Monday (January 31) to clinch the five-match T20I series 3-2. The hosts went on to defend a total of 179 runs against the Moeen Ali-led side to bounce back to winning ways after losing the penultimate game by 34 runs.

West Indies were under significant pressure heading into the series after a disappointing show in the T20 World Cup 2021 last year. The Pollard-led side had failed to make it to the knockout stages at the showpiece event before rumours of an alleged rift between Pollard and some players in the team surfaced.

However, the hosts kept the controversies aside and turned up in the final T20I to clinch an emphatic win against England. Skipper Pollard was delighted with the win and decided to surprise the fans by starting his post-match interview by singing a song.

The superstar all-rounder sang a few lines of the famous song 'Solid as a rock' written by Jamaican musician Sizzla. "I say, they can’t keep a good man down. Always keep a smile when they want me to frown.," Pollard was heard singing on the mic as he began his post-match interview.

The first captain in history to start his post-match interview with a song?

Talking about the game, West Indies won the toss and opted to bat first at the Kensington Oval in Barbados. Openers Brandon Kings and Kyle Mayers got the hosts off to a great start with a 59-run stand for the first wicket before Rovman Powell's 17-ball 35 cameo powered West Indies to a strong total of 179/4 in 20 overs.

Also Read: 'Let him play for that many years': Md. Shami on Babar Azam's comparison with Virat Kohli, Steve Smith

In reply, England were bundled out for 162 runs as they fell short in the run chase by 17 runs to lose the game and concede the series. James Vince (55) and Sam Billings (41) played two brilliant knocks but their efforts were not enough for the visitors, who kept losing wickets at regular intervals.

While Jason Holder continued his fine form with the ball with a five-wicket haul, Akeal Hosein picked up four wickets to wrap up a comfortable win for the hosts.