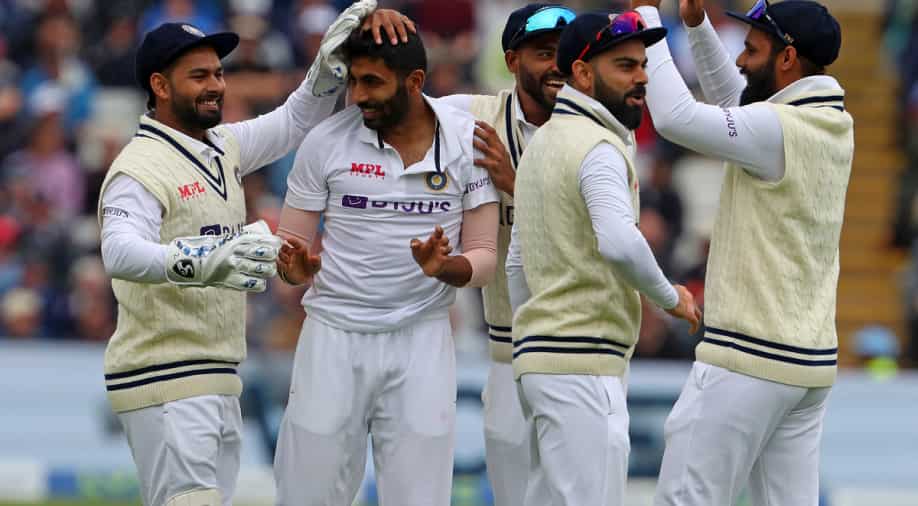 Indian captain Jasprit Bumrah stole the show with the bat and ball on Day 2. Photograph:( AFP )

Skipper Jasprit Bumrah held sway with a mesmerizing all-round performance, which included a world record feat with the bat and an incisive spell with the ball as India seized complete control from England on a rain-hit second day of the rescheduled fifth Test here on Saturday.

Such was the power of Bumrah's all-round show (31 off 16 balls and 3/35) in his first appearance as India captain that it easily overshadowed Ravindra Jadeja's superbly constructed third Test hundred that took India to a commanding first innings score of 416.

England were in all sorts of trouble with half of the team back in the pavilion as the scoreboard made a sorry reading at 84 for 5. The hosts still 332 runs behind the visitors. In the first session, Stuart Broad must have had a feeling of 'deja vu' when he was literally butchered by the stand-in Indian captain, who scored 29 runs with the willow and also was gifted six extra runs to make it 35, highest ever in a single over in Test cricket.

In his first match at the helm as captain, Bumrah would have never thought that he would pip Brian Lara's maximum runs (28 runs) in a single Test match over, which remained intact for 18 years. George Bailey and Keshav Maharaj though had equalled the feat.

Broad can't be faulted if he remembered that September, 2007 night in Durban, when Yuvraj Singh pummelled him for six sixes in an over. He got his 550th Test wicket on the day but by the end of it all, Bumrah had wiped that wry smile off his face.

When England came out to bat, the skipper had nicely warmed up and bowled a menacing first spell and for a change was rewarded for even putting his "foot wrong" on two occasions that resulted in additional deliveries which fetched him a couple of wickets.

After two days of play, India hold all the aces and look good to retain the Pataudi Trophy and stay in contention for a place in the World Test Championship final. While India next play a Test series against Bangladesh in December, the second day in Edgbaston might have provided India with a realistic long-term captaincy option in traditional format as and when Rohit Sharma decides to call time on his Test career.

Bumrah was good with his bowling changes, field placements and also DRS call of his own bowling. In all, a complete package in place.

At the start of the day, Jadeja reaffirmed his status as India's most valuable player across formats as he scored his best Test hundred -- 104 off 194 balls. This century, though, was of a far better quality than his earlier two, especially if one factors in the conditions, match situation and quality of opposition bowling.

Jadeja hit 13 boundaries, and his near four and half hours stay at the crease, gave Pant an opportunity to play his natural attacking game, even as the former dourly defended as and when required. A punchy drive through the cover-point region got him his third century four months after he got the second one in Mohali.

Having already scored 2500 runs in Test cricket alongside taking 242 wickets, Jadeja can safely be termed as the best all-rounder that the Indian team has had since the great Kapil Dev. A Test batting average of 37 plus is better than many specialists who have played for India over the years.

Bumrah used the bat like a sword and even the top-edges seemed like ball hitting the "sweet spot" as four boundaries and two sixes came off Broad's over. There were hooks, pulls and drives to enthral the capacity crowd.
The Indian captain, in fact, gave the hosts a dose of 'Bazball' (Brendon McCullum's attacking philosophy), which had become a trending lingo in English cricket during the past few weeks.

While Rishabh Pant's century for the ages and Jadeja's third Test ton set up the platform, one can't discount the 93 runs that India added with contributions from number 9, 10 and 11.

As far as England's bowling is concerned, James Anderson (5/60), who is a month shy of turning 40, is still class personified, as he got his 32nd five-wicket haul in Test matches. But 40 extra runs, including 14 no balls, will certainly haunt England in the long run.

Also Read: 'Knew you were going to be special': Sehwag responds to Pant after India batter calls him one of the best

Once he came out to bowl, Bumrah had by then already known left-handed opener Alex Lees' (6) weaknesses. He went round the wicket and got one to nip back slightly with the angle as it breached the opener's defence.
In the case of Zak Crawley (9), Bumrah bowled a fuller delivery on the 'fourth off-stump' and Crawley's drive was snapped up by Shubman Gill stationed at third slip.

Similarly, after another rain break, he tested Ollie Pope (10) with another fuller delivery that was slightly wider and the expansive drive only ended in Shreyas Iyer's hands in the second slip.

But India saved their best for the last as Mohammed Siraj got one to rear up awkwardly with wobbly seam as England's best batter Joe Root (31) could only get into a tangle and offer a simple catch to Rishabh Pant behind stumps.