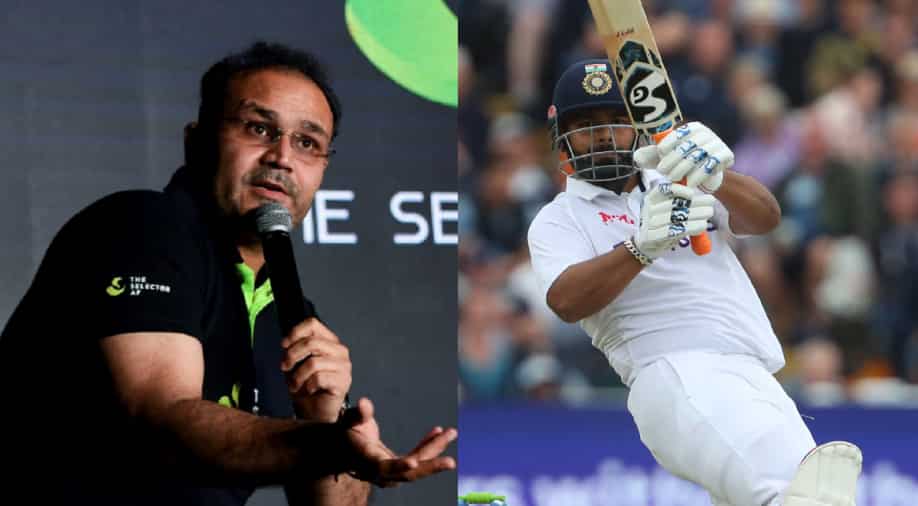 Former India batter Virender Sehwag has responded to Rishabh Pant's message for him after he lauded him for his stunning century against England in the ongoing Edgbaston Test.

Rishabh Pant broke the record for the fastest century by an Indian wicket-keeper batter in Tests as he slammed a brilliant hundred against England in the ongoing Edgbaston Test in Birmingham on Friday (July 01). Pant played a stunning knock of 146 runs off 111 balls laced with 20 fours and 4 sixes as he took the England bowlers to the cleaners to help India recover from a poor start.

India were reduced to 98/5 at one stage in the game before Pant combined with Ravindra Jadeja in the middle to help the visitors bounce back from the poor start. While Pant slammed a fabulous knock of 146 runs, Jadeja scored a magnificent 104 off 194 balls to propel India to a strong total of 416 runs in their first innings.

Pant looked in brilliant touch en route to his amazing knock and went after England bowlers right from the word go. He also broke MS Dhoni's record for the fastest century by an Indian keeper-batter in Tests as he reached the triple-figure mark inside just 89 balls in Edgbaston.

Pant was lauded by many on Twitter for his fantastic knock with former India batter Virender Sehwag also heaping praise on him for his heroics. "Pant is in a league of his own. The most entertaining cricketer in the world, this is a special one," Sehwag had written for Pant in a tweet while sharing a meme.

Pant responded to Sehwag's message for him on Saturday (July 02) and called him one of the greatest. Pant has often been compared with Sehwag for his attacking and aggressive approach in Test cricket which is similar to the former India opener, who was one of the most destructive batters in the longest format during his playing days.

"bhaiya .. love this. you are one of the greatest and one of the best," Pant wrote responding to Sehwag's tweet for him. Sehwag was quick to leave a reply for the Indian wicket-keeper batter and revealed he always believed Pant was destined to be a special player since he first saw him play.

"So proud of you. Since the first time I saw you, I knew you were going to be a special player, and so glad that the world has seen it now, will see many more," wrote Sehwag.

So proud of you. Since the first time I saw you, I knew you were going to be a special player , and so glad that the world has seen it now , will see many more....

After posting 416 runs on the board in their first innings, Indian skipper Jasprit Bumrah got the visitors off to a flying start with the ball durinG England's first innings. Bumrah cleaned up England opener Alex Lee on just 6 runs off 9 balls before dismissed Zak Crawley cheaply on 9 off 17 balls to reduce England to 27/2 inside just five overs. Indian bowlers will be looking to wrap up England's innings early to ensure India remain a strong position in the game.