Jadeja, Ashwin spin India to thumping win by an innings and 222 runs in 1st Test against Sri Lanka 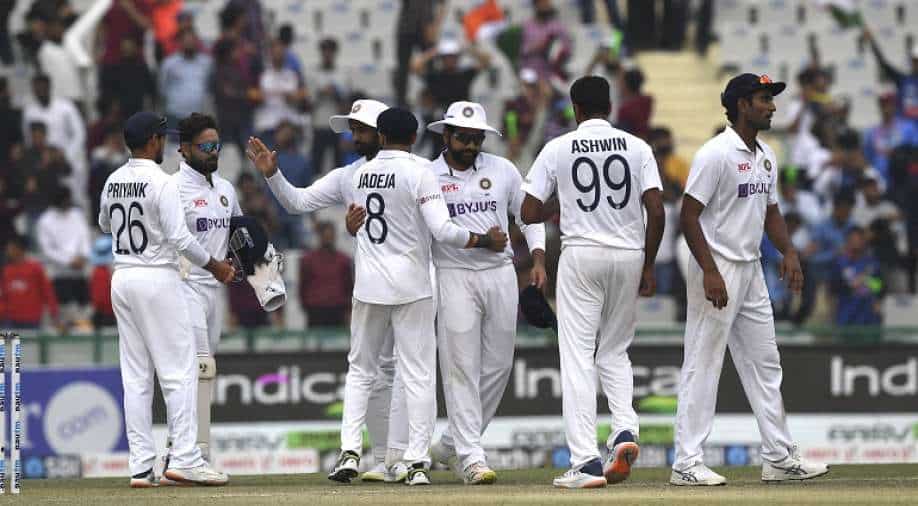 Hosts India defeated Sri Lanka by an innings and 222 runs inside three days in the opening test at Mohali on Sunday to take a 1-0 lead in the two-match series.

India spinners Ravindra Jadeja and Ravichandran Ashwin shared eight wickets to lead the hosts to victory over Sri Lanka by an innings and 222 runs inside three days of the opening test at Mohali on Sunday.

Rohit Sharma could not have hoped for a more emphatic start to his reign as India's test captain and his side will take a 1-0 lead to the second and final match in Bengaluru, which will be played under lights from Saturday.

A day after his unbeaten 175, Jadeja tied Sri Lanka's batters in a knot in the first innings with his left-arm spin, picking up a five-wicket haul as the touring side were bundled out for 174.

Having secured a lead of 400, India enforced the follow-on and bowled out Sri Lanka for 178 in the final session.

Off-spinner Ashwin did the early damage this time by picking up the wickets of Lahiru Thirimanne and Pathum Nissanka, who top-scored in Sri Lanka's first innings with an unbeaten 61.

The 35-year-old Ashwin also dismissed Charith Asalanka and Lahiru Kumara to take his tally to 436 test wickets, climbing past former India all-rounder Kapil Dev to second spot in the list of the country's most successful bowlers in tests.

A number of Sri Lankan batters made starts but could not make it count, once again surrendering meekly to India, who have won 14 consecutive test series at home.

Earlier, the 33-year-old Jadeja completed his 10th five-wicket haul in a test innings by scything through the Sri Lankan lower order and tail with laser-like precision.

ALSO READ: Not Rohit Sharma! Ravindra Jadeja reveals he suggested India to declare despite being on 175 vs Sri Lanka

Resuming on 108-4, Nissanka and Asalanka both survived dropped chances against Ashwin within the first 15 minutes of the third day's play.

Nissanka, who was also bowled off a no-ball from Jasprit Bumrah on Saturday, added 58 for the fifth wicket with Asalanka and kept India wicketless for the first hour.

But once Asalanka was out lbw for 29 to fast bowler Bumrah, Sri Lanka capitulated.

From 161-4, the touring side only added 13 runs in losing their remaining six wickets with Jadeja doing most of the damage.