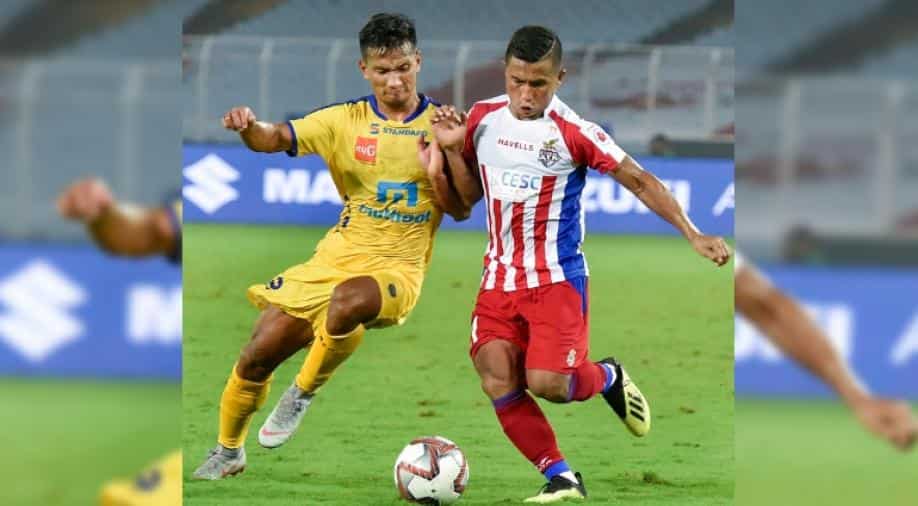 ATK player Lalhmangahsanga and Kerala Blasters' Doungle vie for the ball during the opening match of ISL 2018, in Kolkata. Photograph:( PTI )

Also, the commencement of the tournament marked the return of the first major live sporting action in India after the COVID-19 lockdown.

ATK Mohun Bagan made a winning start in the seventh season of the Indian Super League (ISL) after defeating Kerala Blasters here on Friday.

Also, the commencement of the tournament marked the return of the first major live sporting action in India after the COVID-19 lockdown.

In the season-opener, ATK Mohun Bagan secured a 1-0 win over Kerala Blasters. During the first-half of the game, both the side gave each other a tough competition, restricting one another from taking a lead. After a goal-less first half, both sides started playing aggressively in the second half.

However, it was ATK Mohun Bagan that managed to take advantage. Roy Krishna netted the goal in the 67th minute, putting his side ahead of the Kerala Blasters.

The match did not witness more goals and ATK Mohun Bagan came victorious. For his match-winning performance, Krishna won the Hero of the Match award. After guiding his team to the victory, Krishna said he is happy to get on the scoresheet.

"I am happy to play for this team, especially for this club. It is a privilege. I will not take all the credit. I think we defended really well. I had a few chances in the first half, disappointed. But happy to get on the scoresheet," he said in a video posted by ATK Mohun Bagan on Twitter.