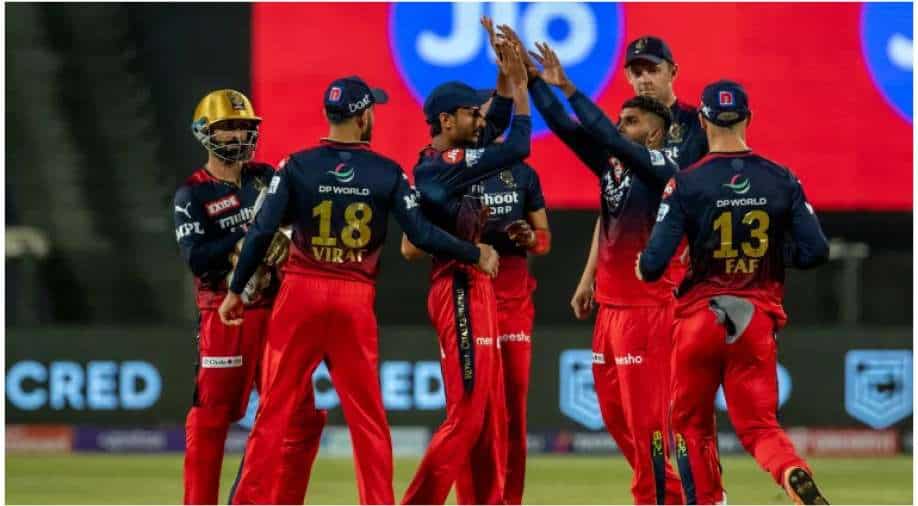 IPL 2022: In match 49, RCB beat MS Dhoni-led CSK by 13 runs to as defending champions near elimination in the 15th season.

Match 49 of the IPL 2022 edition saw the MS Dhoni-led Chennai Super Kings (CSK) take on their close rivals Faf du Plessis-led Royal Challengers Bangalore (RCB) at the MCA Stadium, Pune on Wednesday evening (May 04). Being in a precarious situation with the playoffs race heating up, both sides were in need of a win before RCB eventually emerged on top by 13 runs.

At the coin toss, CSK won the toss and opted to bowl first. Skipper MS Dhoni unlocked another major milestone in his staggering IPL career to become only the second player to play 200 matches for a single franchise (after Virat Kohli). RCB openers Faf and Kohli started off a bit slowly but stitched an impressive 62-run opening stand within 8 overs before skipper Faf was removed by his former teammate Moeen Ali. Moeen, who replaced Mitchell Santner, also picked up the wicket of Virat Kohli. Kohli never got going throughout his innings as he only managed a 33-ball 30.

For CSK, their spinners Moeen Ali (2 for 28) and Sri Lanka's Maheesh Theekshana (3 for 27) changed the course of RCB's innings with regular scalps. Ravindra Jadeja also kept it tight from his end but some runs off Dwaine Pretorius and Dinesh Karthik's 17-ball 26 propelled RCB to 173-8 in 20 overs.

In reply, CSK openers Ruturaj Gaikwad and Devon Conway (56) ensured a good start for the four-time winners and defending champions. Ruturaj, playing once again on his home ground, looked in good touch but Shahbad Ahmed sent him back for a 23-ball 28. Conway continued from his end but lost the support of Ambati Rayudu and Robin Uthappa as RCB spinners Wanindu Hasaranga and Maxwell chipped in with regular breakthroughs. Harshal Patel (3 for 35) and Josh Hazlewood (1 for 19) ended proceedings in RCB's favour by bowling impressively in the death overs.

The likes of Rayudu, Uthappa and Jadeja not firing let down CSK despite them being in control for most parts. With this loss, Dhoni & Co. is nearing an early exit as RCB enters the top 4 (12 points).