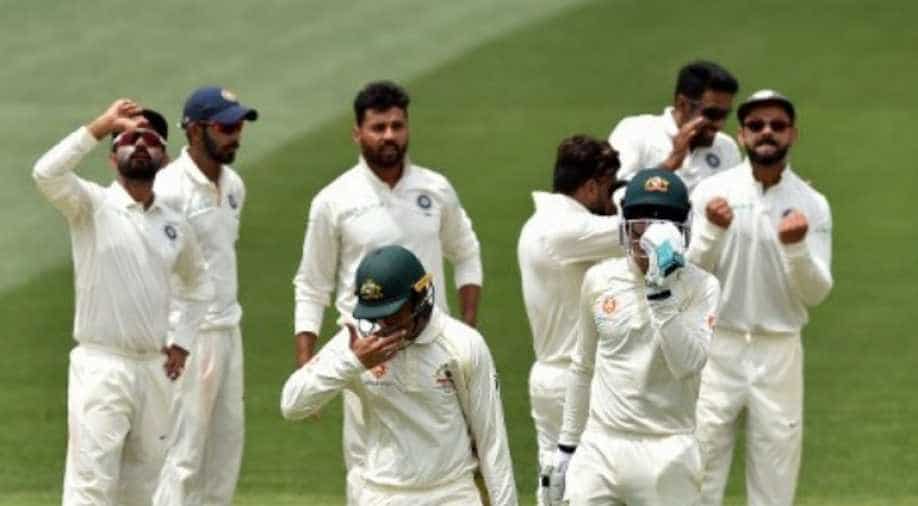 India finished the opening day at 250-9, on the back of a battling 123 from Cheteshwar Pujara.

Australia were 121-5 after 60 overs in reply to India's India's 250 in the second day of the opening Test on Friday in Adelaide.

Aussies started their innings with a shock as Aaron Finch lost his wicket in the first over after he was spectacularly bowled without scoring on only the third ball he faced.

A beautiful delivery from Ishant Sharma took out his middle and off stumps after getting an inside edge as Finch attempted a drive.

His credentials as an opener again called into question after such poor show.

In muggy and overcast conditions, a slimmed-down Usman Khawaja, returning after knee surgery, joined debutant Marcus Harris to show Finch how it should be done.

He compiled a patient 21, putting aside disrupted preparations after the shock arrest of his brother this week for allegedly framing a love-rival with a fake terror plot.

Harris, who was picked on the back of being the second highest run-scorer in Sheffield Shield this season, looked in good nick and unruffled by the occasion, hitting three fours in a solid 26.

Australia were 57-2 at lunch with loss of two wickets but just after coming from the break, Shaun Marsh lost his wicket after scoring just two runs.

Usman Khawaja, who was set after facing 125 balls, was out spun by Ashwin.

Peter Handscomb, who was batting at 34, lost his wicket to Jasprit Bumrah.

Bumrah draws the edge from Handscomb, and Australia are five down for 120.

Earlier, India finished the opening day at 250-9, on the back of a battling 123 from Cheteshwar Pujara, and they failed to add to the total.

When they resumed, tailender Mohammed Shami was out for six on the first delivery of the day, caught behind by Tim Paine off Josh Hazlewood, leaving Jasprit Bumrah unbeaten on 0.