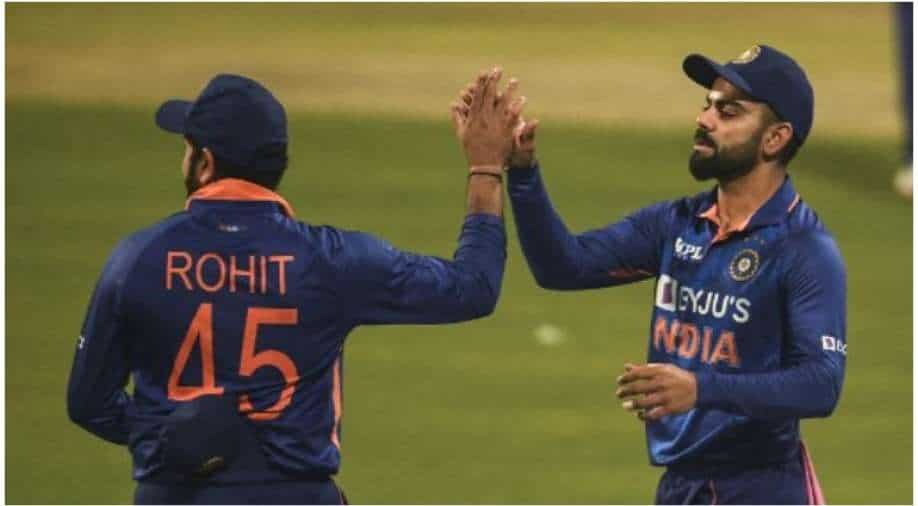 India vs WI: In the first T20I, Virat Kohli once again convinced his successor Rohit Sharma to take a review. Here's the video:

During the first ODI between India and West Indies, former Team India skipper Virat Kohli had convinced his successor Rohit Sharma to take a review which led to Shamarh Brooks' dismissal, in Ahmedabad. A similar such incident took place during the three-match T20I series opener between both sides on Wednesday (February 16), at Eden Gardens, Kolkata.

Opting to bowl first, Rohit & Co. had started well to claim two wickets in the WI innings. During debutant leg spinner Ravi Bishnoi's maiden over, India went ahead and took a Decision Review System (DRS) in a bid to claim Roston Chase's wicket. It was a googly from the spinner which went down the leg side and wicketkeeper Rishabh Pant dislodged the bails. Initially, square leg-umpire Jayaraman Madanagopal signalled a wide amid strong appeal for a caught-behind by the Indian players.

At first, Rohit was taken aback by the umpire's initial decision but was convinced by Kohli to take the decision upstairs. “Main bol raha hu, tu review le (I’m saying it, you go ahead for the review),” Kohli told Hitman. By the time Rohit took the DRS, leg umpire had already obliged to the appeal made by the home team. For the unversed, nowadays umpires check for caught-behind as well before checking for a stumping call. Watch the video:

Thus, India’s review remained intact. The UltraEdge confirmed the flat line when the ball had passed Chase's willow. Further, the umpire review also assured that there was a spike when the ball passed the pad and, hence, not bat was involved. As the spin-bowling all-rounder was well within his crease when the bails were dislodged, he resumed his innings. In addition, as there was pad involved, the wide call was overturned by the main umpire.

Chase couldn't do much with the bat as he fell for 4, lbw off Bishnoi. Nicholas Pooran's fifty took Windies to 157/7, with Bishnoi and Harshal Patel claiming two wickets apiece. Eventually, Rohit-led India won the clash by 6 wickets and 7 balls to spare to go 1-0 up in the series.

The second and penultimate match will be played at the same venue on Friday (February 18).