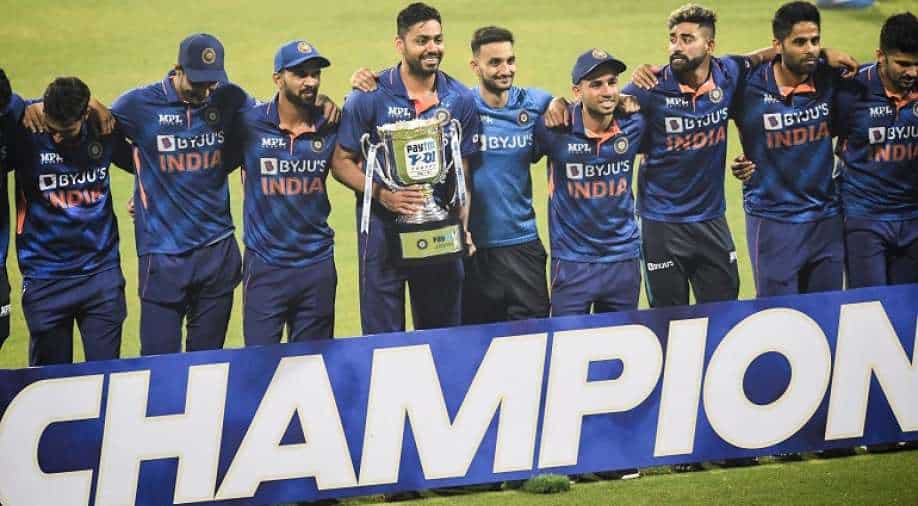 India's players pose for pictures with the trophy after winning the T20I series 3-0 against West Indies. Photograph:( AFP )

After beating West Indies 3-0 in the T20I series, Team India will now look to carry their form into the three-match series against Sri Lanka, beginning Thursday.

After clinching the T20I series against West Indies, Team India will now look to carry their form into the three-match series against Sri Lanka, beginning Thursday.

India and Sri Lanka will square off in three T20Is and two Tests, with the first match of the series to be played in Lucknow on Thursday.

The likes of Virat Kohli, Rishabh Pant and Shardul Thakur have been rested for the series against Sri Lanka and hence it will give a chance to the likes of Ruturaj Gaikwad and Shreyas Iyer to show what they are capable of.

The duo failed in the third T20I against West Indies, but they would hope that they impress against Sri Lanka.

Sanju Samson has also been drafted into the squad and it would be interesting to see whether the management gives him a go in the playing XI.

Spinner Ravi Bishnoi also impressed in his maiden T20I series and he will look to march ahead with the momentum.

Jasprit Bumrah is also back for the series against Sri Lanka and the bowling attack will get strengthened further.

Bhuvneshwar Kumar showed what he is capable of in the series against Windies and that emerged as a big positive.

However, the highlight over the last week has been Venkatesh Iyer. The way he has managed to finish off matches for India has been a big sign and if he manages to improve his bowling, the management can have a world-class all-rounder.

Talking about Sri Lanka, the side suffered a 1-4 defeat at the hands of Australia and the side was let down by batting time and again.

Skipper Dasun Shanaka would hope that the batting side gets the act together and is able to give a fight to Team India.

ALSO READ: 'Your life is an inspiration': Virat Kohli responds with heartfelt note after Yuvraj Singh's gesture for him