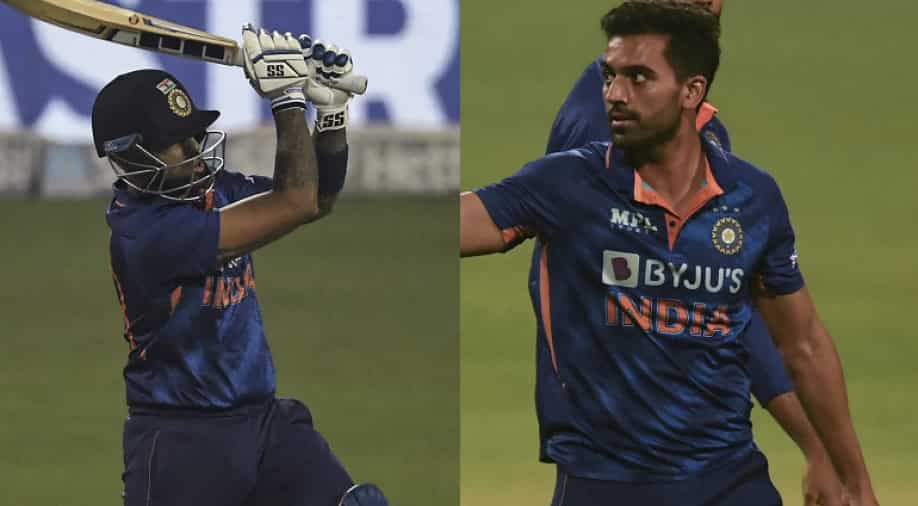 Suryakumar Yadav and Deepak Chahar have been ruled out of the T20I series against Sri Lanka. Photograph:( AFP )

Indian pacer Deepak Chahar and star batsman Suryakumar Yadav have been ruled out of the upcoming T20I series against Sri Lanka.

In what comes as a huge blow for the Indian team ahead of the start of the upcoming T20I series against Sri Lanka at home, star batter Suryakumar Yadav and pacer Deepak Chahar have been ruled out of action due to respective injuries. Chahar had picked up a injury while playing during the third and final T20I between India and West Indies on Sunday.

Chahar has injured his right quadriceps while Suryakumar has suffered a hairline fracture on his hand. Surykumar also sustained the injury during the third T20I against West Indies. Both the players will not be avialable for the three-match T20I sereis against Sri Lanka which gets underway from Thursday (February 24).

"Deepak sustained a right quadriceps injury during bowling while Suryakumar suffered a hairline fracture during a fielding attempt in the third and final T20I against the West Indies in Kolkata on Sunday. They will now head to the National Cricket Academy in Bengaluru for further management of their injuries," BCCI informed in an official statement.

While the board has not announced any official replacements for the two players, the likes of Avesh Khan, Harhsal Patel and Mohammed Siraj will comprise the pace attack along with the experienced duo of Bhuvneshwar Kumar and Jasprit Bumrah.

Bumrah, who had missed the recently-concluded three-match T20I series against West Indies, will be making his return to the team and will be spearheading India's pace attack. The Rohit Sharma-led side will be looking to continue their winning run having beaten New Zealand and West Indies in their last two T20I series.

Meanwhile, in the absence of Suryakumar, the likes of Sanju Samson and Deepak Hooda can be slotted in the middle-order. The return of Ravindra Jadeja will further strengthen India's batting line-up while young all-rounder Venkatesh Iyer will be looking to continue his good form after impressing against West Indies.