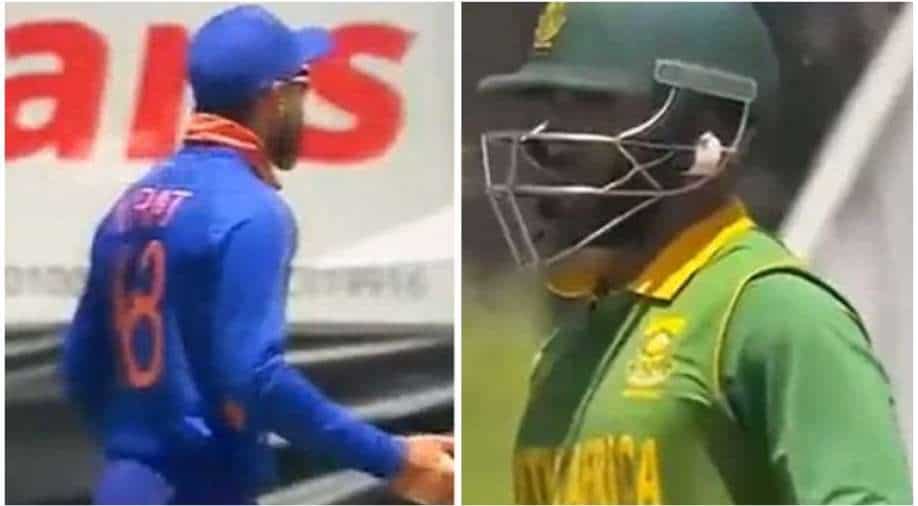 During the ODI series opener, in Paarl, Virat Kohli's rocket throw erred SA skipper Temba Bavuma as the duo had a fiery exchange. Here's the video:

India and South Africa played out the first ODI, at Boland Park, Paarl, on Wednesday (January 19) after the three-match Test series ended in the African nation. KL Rahul-led India lost the series opener convincingly, by 31 runs, as Temba Bavuma's Proteas have gone 1-0 up in the series.

While winning the toss, SA opted to bat first, they weren't off to a great start and were reduced to 68 for 3. Bavuma and Rassie van der Dussen's match-winning 204-run fourth-wicket stand propelled the hosts to 296-4 as Rahul & Co. were restricted foe 265-8 in response.

During centurions Bavuma (110) and Rassie's (129 not out) partnership, the former wasn't pleased with former Indian captain Virat Kohli's efforts on the field as the duo had a fiery exchange. In the 36th over, bowled by Yuzvendra Chahal, Bavuma played a shot towards short covers. Kohli was stationed at that position, who collected the ball and unleashed a powerful throw at the keeper's end. While there was hardly any chance of a run-out, Bavuma felt the throw could've hit him hard. Hence, he made his displeasure known and uttered some words towards Kohli.

To this, the 33-year-old Kohli also didn't remain mum and gave it back to Bavuma. Nonetheless, it didn't escalate any further. Here's the video of the entire episode:

At the post-match press conference, the South African captain Bavuma labelled his side's performance as a 'perfect game'.

"We played close to a perfect game, that's quite hard in 50-over cricket. We can take a lot of confidence. I struggled throughout the innings, Rassie seemed like batting on another wicket. That partnership was the decider. I tried to partner him as much as I could. Another good debut for him (Jansen), we feel he can take wickets with the new ball. He's growing from strength to strength and it's nice to see," he opined.

The second and penultimate ODI will also be held at the same venue, on Friday (January 21), before the action moves to the series finale at Newlands, Cape Town on Sunday (January 23).