I see same passion in you, says Vivian Richards to Virat Kohli 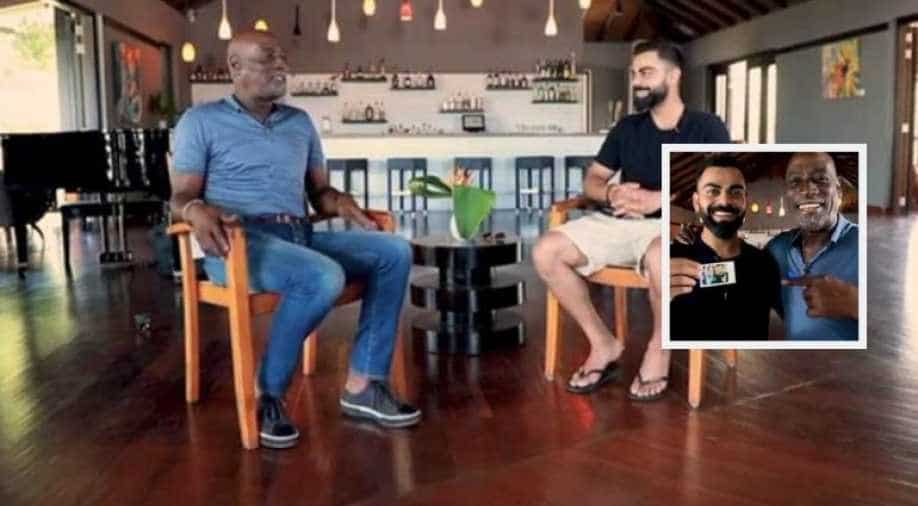 'It may sound arrogant but I always felt that I was involved in a game that I knew. I would back myself every time,' Richards to Kohli

In a video posted on the Twitter handle of India's cricket board BCCI, Kohli introduced Viv Richards as "the greatest inspiration to all of us batsmen", he further quizzed the Windies great to understand his fearless mindset while facing the fastest of bowlers of his time.

Virat said that earlier there were less protection and no restriction on bouncers but despite that Richards dominated the game with ease.

Virat asked, "Whenever I have seen videos of you walking out, you're in a hat, no helmets back then. Even when there were, after a point you chose not to. Because it was something that made you feel like you had the belief and 'you are chewing gum'."

"What did you feel from the time you left the changing room till you got to the pitch. What was the mindset?" Kohli added.

Replying to that, Richards said, "I believed I am the man," said Richards.

"It may sound arrogant but I always felt that I was involved in a game that I knew. I would back myself every time," he added.

"You have to back yourself to get hurt, to take the knocks. But the helmet — I tried, I am not going to lie and tell you. But, it felt a little uncomfortable. So I felt my cap, my maroon cap which was given to me. I felt so proud with that," said the 67-year-old.

"My mindset was that if I am good enough to be here, if I get hurt it's God's will. I will survive," he added.

🚨Part of 2 of the special chat with @ivivianrichards and @imVkohli is out!

Playing in Australia brought the best out of them. Find out how they relished the challenge of taking on some of the best bowlers in the world. 😎

Richards, who had earlier praised Kohli's batting skills, said that he sees the same passion in the Indian skipper. "I see that little similarity in you and that same passion in you," said Richards.

Richards, who scored 8,540 Test runs and 6,721 One-Day International (ODI) runs before announcing retirement in 1991, further said, "I always felt I was good enough to be competing and I wanted to express myself in the best way that I can."