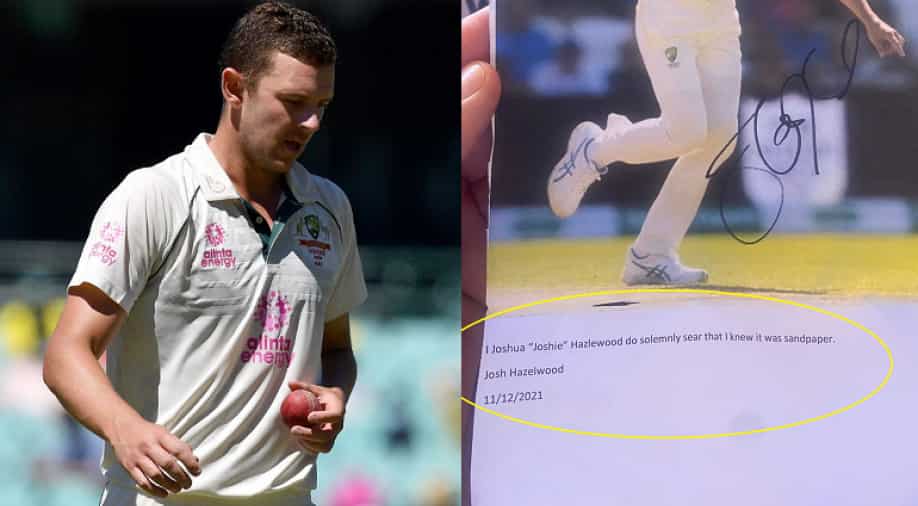 Australian pacer Josh Hazlewood fell victim to a hilarious prank by the Barmy Army during the first Test between Australia and England in the ongoing Ashes 2021-22.

Hazlewood also signed a few autographs and fell prey to a witty prank pulled off by a member of the Barmy Army. The fan got Hazlewood to sign a picture of himself, however, the Australian pacer was not aware of the cheeky text written on the bottom of the photograph.

“I Joshua ‘Joshie’ Hazlewood do solemnly sear (swear) that I knew it was sandpaper," read the text at the bottom as Barmy Army once again had a laugh at the expense of the Australian team by taking a dig at them over the Sandpaper Gate that rocked Australian cricket in 2018.

The Barmy Army took to Twitter to share the picture of the photograph signed by Hazlewood and captioned the post - "Josh Hazlewood just signed this on the boundary, we knew it".

Josh Hazlewood just signed this on the boundary, we knew it #Ashes pic.twitter.com/Nvx5Llz7ut

Hazlewood was part of the Australian playing XI in the infamous Cape Town Test against South Africa in 2018 when Cameron Bancroft was caught live on the camera trying to tamper with the ball using sandpaper. The sandpaper scandal saw Cricket Australia (CA) endure immense criticism.

It also led to the Australian cricket board handing out bans of one year each to then captain Steve Smith and vice-captain David Warner for their role in the ball-tampering scandal. Bancroft, on the other hand, was banned for nine months for his actions.

Earlier this year, Bancroft opened up on the saga and hinted that the Australian bowlers playing the game were aware of the whole plot. However, Hazlewood and other Australian bowlers who played in the game have maintained they had no role to play in the incident.