High fives at Mercedes as Hamilton sets sights on six 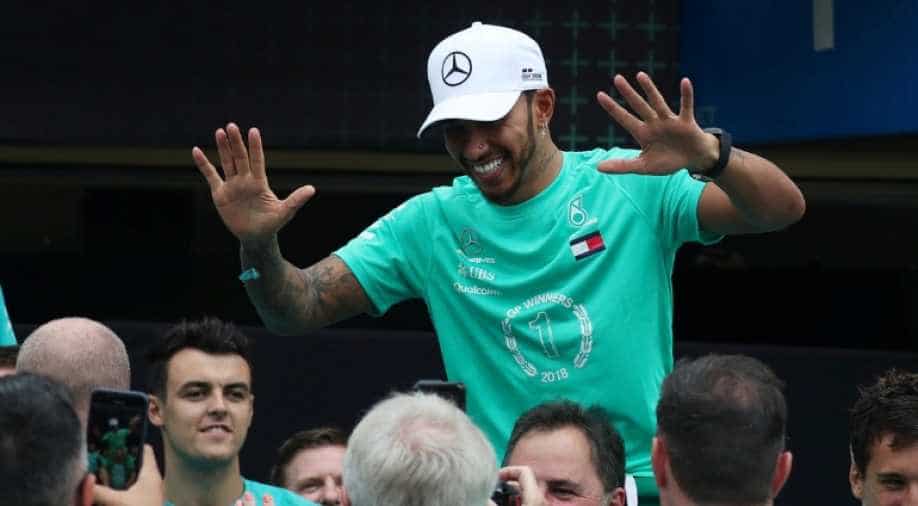 Hamilton has won 10 of 20 grands prix and taken 10 pole positions this season, with one race remaining in Abu Dhabi next week.

Five-times Formula One world champion Lewis Hamilton vowed to raise the bar further next year as he told Mercedes factory staff on Tuesday never to stop believing in what they can achieve.

Fresh from Brazil, where he won Sunday's race and Mercedes completed a record-equalling fifth consecutive constructors' and drivers' title double, the Briton thanked the massed men and women driving the team's success and set his sights on more.

He and Finnish team mate Valtteri Bottas also joined in a red cap salute to absent non-executive chairman Niki Lauda, the Austrian three-times world champion who is recovering from a lung transplant in August.

"I do believe this team can do it again," Hamilton told Reuters after being surrounded by staff seeking selfies and autographs, with five title-winning cars lined up outside the Brixworth high performance engine facility.

"I do believe that we have the capability and there's an opportunity there. It just depends how much work we put in from now until the start of the season.

Hamilton has won 10 of 20 grands prix and taken 10 pole positions this season, with one race remaining in Abu Dhabi next week.

Closest rivals Ferrari won six with Red Bull -- switching from Renault to Honda engines in 2019 -- the rest in the toughest title battle Mercedes have fought since the V6 turbo hybrid era started in 2014.

"I've not been on top of everything. There's always areas that you can understand and improve on," he said after a team photograph with everyone raising their hands in a high five.

"But ultimately we have a really good foundation so we've just got to keep on building. It's just about being strategic and being really selective and think how you go about the process.

"And as a driver myself individually I've just got to try and find where the weak areas are and see if I can improve it," he added.

Team boss Toto Wolff told Reuters there had already been a discussion that morning with engineers about 2019.

"We said 'How can we get better next year, where are the areas to improve?'," said the Austrian. "I'd like to take it a step up."

Hamilton had said in Brazil that returning to the factories would be emotional, telling every member of the team they should look in the mirror and say 'I'm a legend'.

He added on Tuesday that meant taking pride in the achievements and celebrating, while avoiding complacency.

"You've got to have that self-belief that you've got the ability and that you're great and you can be great if you work towards it," he said.

"It is what is enabling us to do what we are doing and achieving.

"We have just done something quite legendary, collectively as a team. It's not a bad thing to acknowledge how well we've done. Acknowledge it, absorb it and want to do better."