He forced selectors to think that 'look, you can't ignore me': Kapil Dev heaps praise on Dinesh Karthik 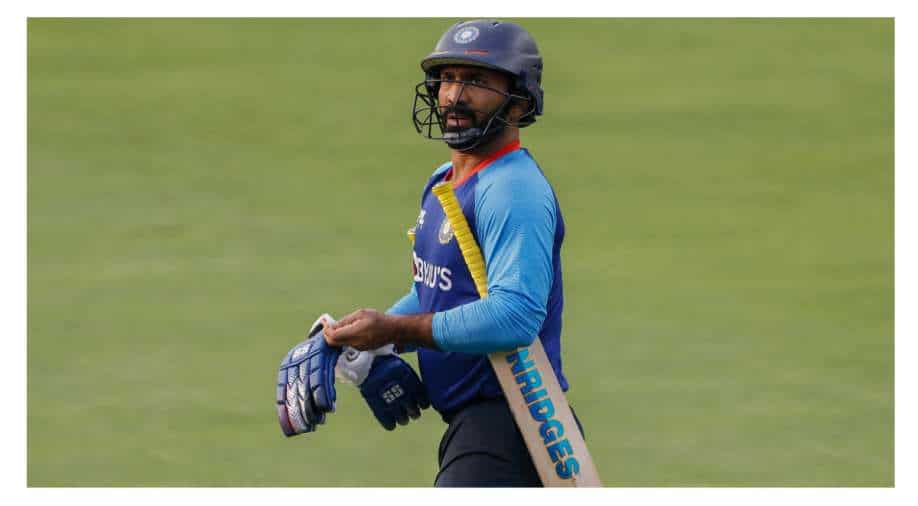 He forced selectors to think that 'look, you can't ignore me': Kapil on DK Photograph:( AFP )

Dinesh Karthik has been hailed by many and labelled as the comeback man after he was named in India's T20I squad for the home series versus Temba Bavuma-led South Africa. Karthik played his first-ever game for Team India -- after the 2019 ODI World Cup semi-finals -- when he stepped onto the 22-yard cricket strip for Rishabh Pant & Co. during the series opener in New Delhi.

While he didn't face a lot of balls in the first T20I, Karthik returned with an impressive 21-ball 30 not out in the second match of the series, in Cuttack on Sunday evening (June 12). Thus, former Indian captain, Kapil Dev has heaped praise on DK for his impressive run in IPL 2022 -- where he ended with 330 runs at 183.33 for the Royal Challengers Bangalore (RCB) -- and lauded him for keeping his motivation levels high despite not representing India for a long time.

"This time he has performed so well (in IPL 15) that he has forced the selectors to think that 'look, you can't ignore me'. Rishabh Pant is a youngster, he has plenty of cricket. Dinesh Karthik has experience and performance, which is why I would say, that no praise is enough for him," said Kapil on Youtube channel Uncut.

The 1983 World Cup-winning captain added, "He has been playing cricket even before MS Dhoni. It’s been 2 years since Dhoni retired but even now, Karthik has kept his motivation level high and to love the game with the same passion and heart after so many years is not easy. If you talk about consistency, then Dinesh Karthik is ahead of them all. Irrespective of how many balls he faces – 20, 10, or 15, he always delivers, like we saw in the IPL."

Karthik has surely kept his dreams alive of representing India in the 2022 T20 World Cup. Nonetheless, he would still need to perform on a consistent level to hold onto his spot, especially after regulars such as captain Rohit Sharma, vice-captain KL Rahul, former skipper Virat Kohli, Jasprit Bumrah, Ravindra Jadeja, etc. return back into the playing XI.

Karthik-starrer India are facing South Africa in the third T20I in Visakhapatnam, on Tuesday evening (June 14), in a bid to keep the five-match series alive.