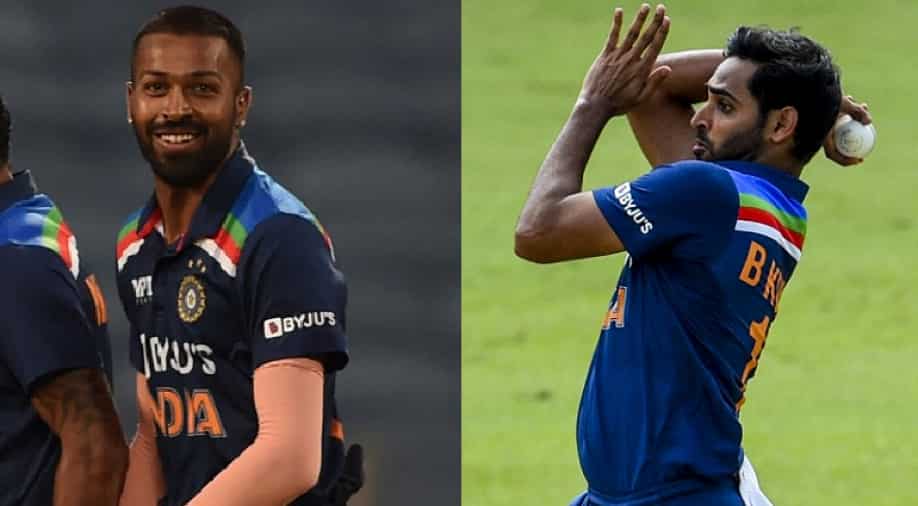 Hardik not bowling and Bhuvneshwar's form are concerns for Team India. Photograph:( AFP )

Former India wicket-keeper Parthiv Patel has listed some concerns for Team India ahead of the start of their campaign in the T20 World Cup 2021.

India thrashed England by seven wickets in their first warm-up match in Dubai on Monday to fine-tune their preparations ahead of the start of their campaign in the T20 World Cup 2021. The batters impressed as fifties from Ishan Kishan (70 off 46 balls) and KL Rahul (51 off 24 balls) helped India chase down the target of 189 runs comfortably with an over to spare.

However, India's bowling woes were left exposed against the formidable English batting line-up during the warm-up clash. Senior pacer Bhuvneshwar Kumar looked completely out of sorts as he went on to concede 54 runs off his four overs and finished wicket-less. Spinner Rahul Chahar also had a disappointing outing as he gave away 43 runs in his four overs while picking up a solitary wicket.

Former India wicket-keeper Parthiv Patel listed a few concerns for India heading into the T20 World Cup and said Bhuvneshwar's form is worrying. Parthiv also expressed concerns over Hardik Pandya's inability to contribute with the ball after the all-rounder once again didn't bowl even a single over in the warm-up game against England.

“I don't think Hardik is going to bowl in the first few games looking at the way Virat Kohli has used only five bowlers,” Parthiv Patel said on Star Sports.

“Yes, I'm worried about Bhuvneshwar Kumar. He looks in the kind of form which he had in the IPL, where he took just six wickets, but yeah, he looked out of rhythm, almost as if didn't practice.

Hardik didn't bowl at all for Mumbai Indians in the second leg of the Indian Premier League (IPL) as well and is being seen as a finisher in the squad for the T20 World Cup. India will open their campaign against arch-rivals Pakistan with a blockbuster clash in Dubai on October 24.

The Indian team will have another chance to test some players and settle down on their best combination when they take on Australia in their second warm-up match on October 20.