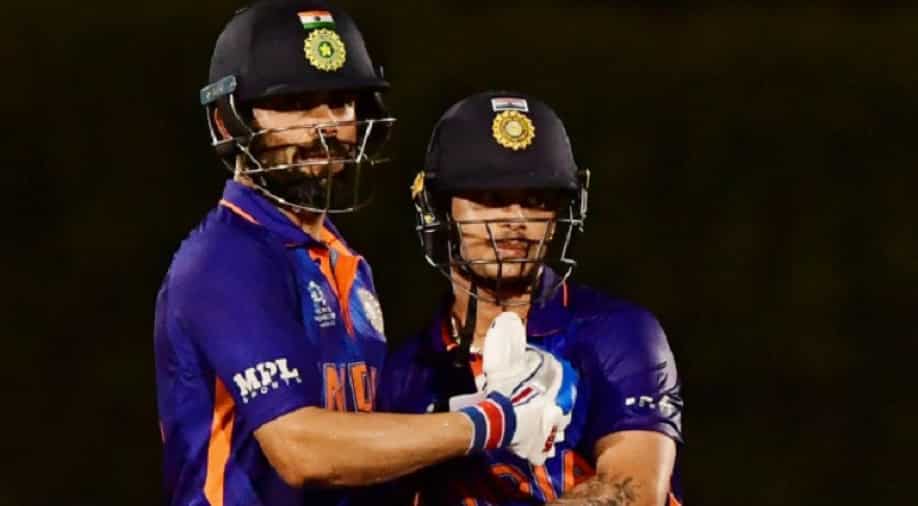 Indian captain Virat Kohli opened up on India's opening combination ahead of the start of their campaign in the T20 World Cup 2021.

Team India thrashed England by seven wickets in their first warm-up match of the ICC T20 World Cup 2021 on Monday (October 18) to find some momentum ahead of the start of their campaign in the showpiece event. India comfortably chased down the target of 189 runs with the help of half-centuries from KL Rahul (51) and Ishan Kishan (70) to bag a comprehensive win.

With Kishan doing well as an opener ahead of the start of India's campaign, the left-hander might pose some selection headaches for captain Virat Kohli and the team management. However, Kohli on Monday confirmed that Rahul will open the batting for the Men in Blue alongside senior opener Rohit Sharma. Opening up on the team's opening combination ahead of the start of their campaign in the tournament, Kohli said it was difficult to look beyond Rahul at present.

"Things were different before IPL, now it's difficult to look beyond KL Rahul. He's been solid upfront. I will be batting at 3. That's the only thing I can say for now," said Kohli during toss ahead of the warm-up game against England.

Talking about the warm-up game between India and England, the Jos Buttler-led side posted a strong total of 188 runs batting first at the ICC Academy Ground in Dubai with the help of Jonny Bairstow's 49 off 36 balls and Moeen Ali's quickfire 20-ball 43.

In reply, India were off to a flyer as Rahul and Kishan shared an 82-run stand for the first wicket and set the stage for a comprehensive win for the Men in Blue. While Rahul dashed his way to 51 off just 24 balls, Kishan too went all guns blazing in his 46-ball 70 laced with seven fours and three sixes.

Rishabh Pant then cracked an unbeaten 29 off just 14 balls and combined with Hardik Pandya (10) to take India over the line comfortably in the run-chase. India will now take on Australia in their second warm-up match on October 20 before opening their T20 World Cup 2021 campaign against Pakistan on October 24.