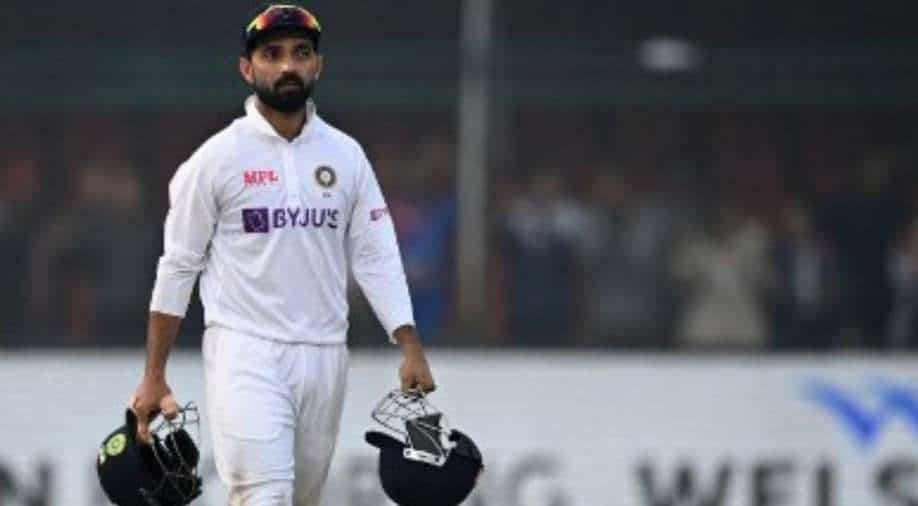 This is a file photo of Ajinkya Rahane. Photograph:( AFP )

Former Indian cricketer Harbhajan Singh weighed in on the performance of Ajinkya Rahane, who is going through a lean patch in his career. The former spin legend has also named a replacement of Test vice-captain, claiming it to be the "perfect solution" for Team India.

The 33-year-old has been facing criticism for his recent performances as he has hit just one century and a couple of fifties in the last 16 Tests. His average has also declined.

If we talk about his performance in 2020, he scored 272 runs in four matches he played and in 2021, he scored 407 runs from 12 Tests he has played. In India vs New Zealand Test in Kapur, his performance was criticised as he scored 35 in the first innings and four runs in the second.

Media reports have even suggested that Rahane might lose his Test vice-captaincy going forward. It has been understood that the Indian cricket governing body, BCCI, might pick T20 skipper Rohit Sharma as Test vice-captain for the upcoming South Africa series.

Meanwhile, Harbhajan has backed young Indian batter Shreyas Iyer to replace struggling Rahane, saying that he is "ready to fill the slot". Speaking on his YouTube channel, the former spinner said, "Shreyas Iyer batted brilliantly in the last game and showed his talent."

Shreyas Iyer has dazzled on his debut Test by hitting a magnificent century. Talking about the same, Harbhajan said, "I am so happy that he made the most of the opportunity in the middle order. Meanwhile, Ajinkya Rahane is not scoring runs. Going forward, Iyer could be India's perfect solution."

The first Test ended as a draw but Iyer won the Player of the Match award.

"Don't know if Rahane will be a part of the India squad for the South Africa series but Iyer, I feel, has made his case as a middle-order option. It will be interesting when the selection happens," he further said.