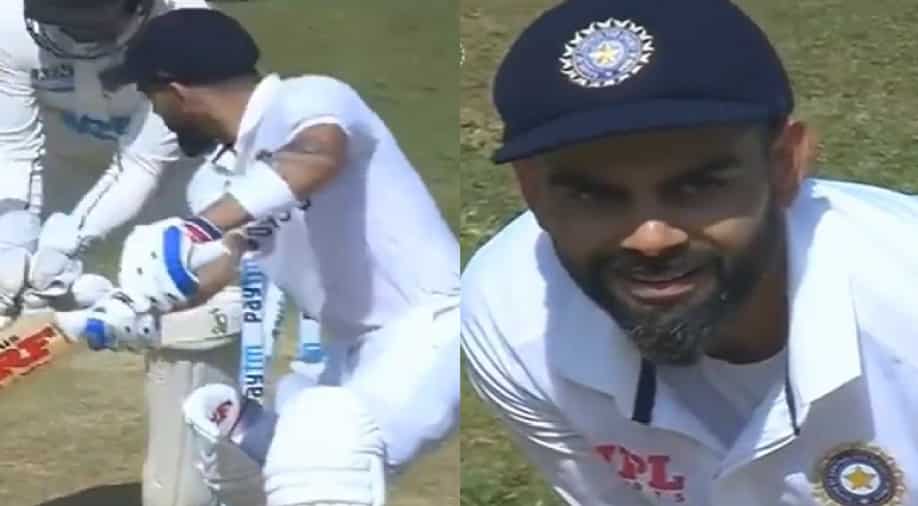 Virat Kohli was in disbelief after being bowled by Rachin Ravindra in 2nd Test. Photograph:( Twitter )

Indian skipper Virat Kohli was left stunned as New Zealand spinner Rachin Ravindra bowled him in the ongoing second Test between the two sides at the Wankhede Stadium in Mumbai.

Indian skipper Virat Kohli was once again dismissed by a spinner in the second innings of the ongoing second Test between India and New Zealand at the Wankhede Stadium in Mumbai. Kohli was bowled by spinner Ravindra during India's second innings on Day 3 of the Test match on Sunday (December 05).

The dismissal took place in the 63rd over when Kohli was batting on 36 and inching close towards his half-century. On the very first ball of the over, the left-arm spinner dismissed the Indian skipper. It was bowled short by Ravindra and the ball further drifted away from Kohli, who went for the cut but was beaten as the ball took an inside edge of his bat and ended up crashing into the stumps.

Kohli was left in disbelief as he stood stunned in the middle with a cheeky grin on his face. The Indian captain's reaction to his dismissal soon went viral on social media.

In India's first innings of the Mumbai Test, Kohli, who was making his comeback after missing the series-opener, was dismissed on a duck by left-arm spinner Ajaz Patel. Patel went on to script history as he ended up claiming all ten wickets in India's innings and became only the third bowler in the history of Test cricket to achieve the massive feat.

Also Read: 'That is where I missed Virat Kohli': Aakash Chopra lauds Indian captain as NZ get skittled out for 62

However, Patel's efforts went in vain as India posted a strong total of 325 runs on the board in their first innings before skittling out New Zealand for only 62 runs in their first innings. India gained a massive lead of 263 runs after an exceptional bowling effort and capitalised well in their second innings.

While Mayank Agarwal continued his purple patch with a brilliant 62, Cheteshwar Pujara (47), Shubman Gill (47) and Kohli (36) all made crucial contributions to help India reach 276/7 in their second innings on Day 3 before declaring. New Zealand have been handed a huge target of 540 runs to win the second Test at the Wankhede Stadium.