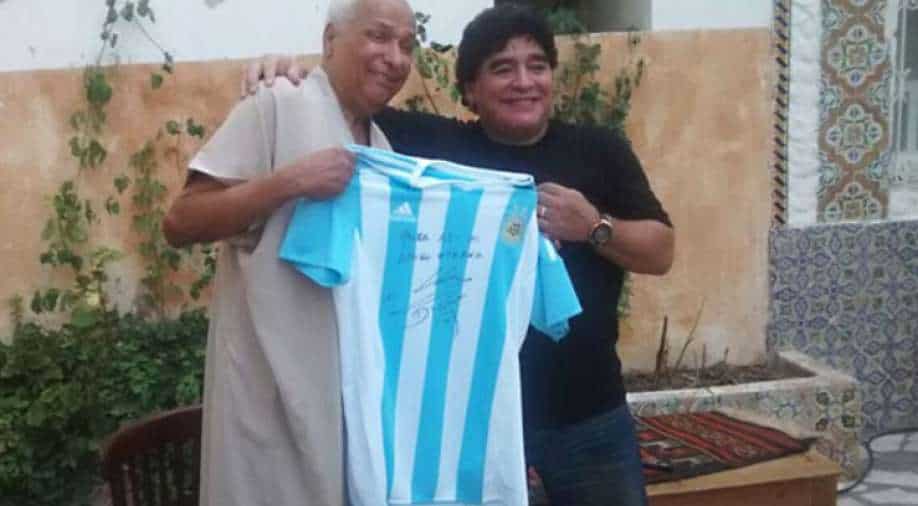 Former Tunisian football referee Ali Bin Nasser, who officiated in the 1986 FIFA World Cup quarter-final in which Diego Maradona scored his famous brace against England, lauded the Argentine as a “genius” after his demise at the age of 60 on Wednesday.

Former Tunisian football referee Ali Bin Nasser, who officiated in the 1986 FIFA World Cup quarter-final in which Diego Maradona scored his famous brace against England, lauded the Argentine as a “genius” after his demise at the age of 60 on Wednesday.

Bin Nasser conceded that he doubted the validity of Maradona’s infamous ‘Hand of God’ goal but termed his second goal from the game as “masterpiece”.

In the 51st minute of the last-eight encounter in Mexico, Maradona outjumped England goalkeeper Peter Shilton and used his hand to slide the ball into the net to give Argentina a 1-0 lead.

"I didn't see the hand, but I had a doubt," Bin Nasser, the first Tunisian to referee a World Cup quarter-final, told AFP.

"You can see the pictures -- I stepped back to take the advice of my assistant, Bulgarian (Bogdan) Dochev, and when he said it was good, I gave the goal."

The 76-year-old reckoned he was the go-to-man for FIFA in crunch matches while adding the football governing body rated him highly for his performance in the controversial match.

"I had already refereed a match between the USSR and China in 1985, I was the man of difficult missions for FIFA," Bin Nasser said.

"FIFA gave me a 9.4 on this game, I did what I had to do, but there was confusion -- Dochev later indicated that he had seen two arms, and he didn't know if it was Shilton's or Maradona's."

Argentina went on to defeat England in the semi-finals of the World Cup they would go on to win when Maradona put them two goals ahead with the latter strike voted ‘Goal of the Century’.

The then-Napoli megastar dribbled past six England players before rattling the empty net.

"I was ready to whistle for a dangerous foul on Maradona," remembered Bin Nasser of a goal which proved to be the winner after Gary Lineker pulled one back for England.

"I thought after 50 yards of effort they were going to bring him down.

"I was proud to participate in that masterpiece."

Maradona, 29 years later, visited Bin Nasser while shooting an advertisement in Tunisia and gave him a T-shirt bearing the words "To my eternal friend Ali".

"We had a good time, I told him that that day, it was not Argentina who won, but him, Maradona.

"He was a genius, a football legend. As a referee, I did not allow myself to close my eyes even for a second when following him, because he was capable of anything."