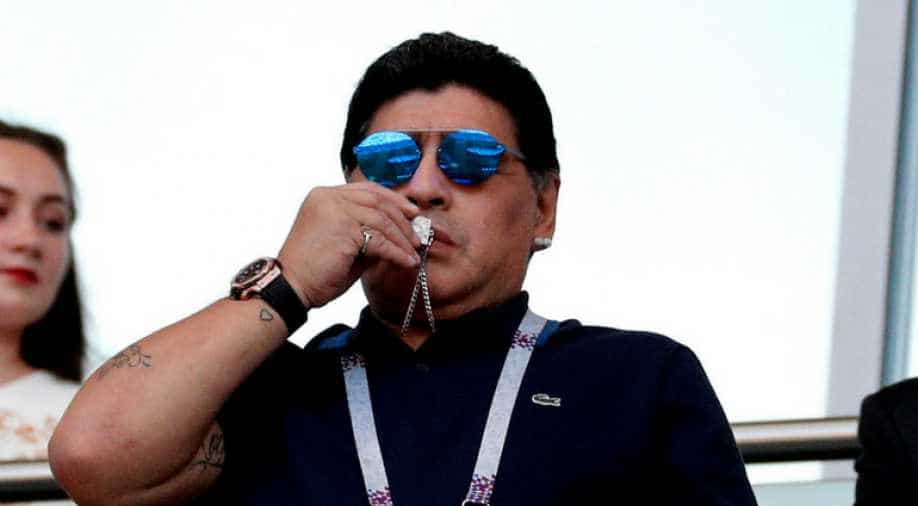 Argentine soccer legend Diego Maradona is seen during the FIFA World Cup 2018 round of 16 soccer match between France and Argentina in Kazan, Russia. Photograph:( Agencia EFE )

Argentina's world cup-winning captain Diego Maradona has died after suffering a cardiac arrest, as per media reports in his native country.

Argentina's world cup-winning captain Diego Maradona on Wednesday breathed his last as he passed away in his house at the age of 60. Maradona, who was regarded as one of the greatest to have taken the football pitch, leaves a rich legacy behind him and remains the only captain to have guided Argentina to a World Cup win. Tributes have come pouring in for Maradona, with the Argentine Football Association announcing the news on social media.

Football lost of its most legendary players as Maradona died on Wednesday, weeks after having brain surgery. As per reports, doctors tried their best to save Maradona's life but it was too late. Maradona was hospitalised earlier this month and underwent surgery for a blood clot on the brain.

Maradona was released from the hospital on November 12 and was being treated for his alcohol dependency in a recovery clinic in Buenos Aires.

The former Napoli megastar had emergency surgery for a subdural haematoma, a blood clot on the brain. He was admitted to the hospital longer than expected as he was showing withdrawal symptoms for his dependency on alcohol.

He was managing Argentine club Gimnasia de La Plata.  He played club football for Boca Juniors, Napoli and Barcelona among others and was adored by millions all over the world for his brilliant skills. He spent two years at the Nou Camp before heading to Napoli, where he spent the next seven seasons and scored over 100 goals.

Maradona was behind the infamous 'Hand of God' that eliminated England from the 1986 World Cup. His trophy-laden career was tinged with controversy because of drug and alcohol addiction. He almost died of cocaine-induced heart failure in 2000 and underwent years of rehabilitation.

ALSO READ: 'One day we'll kick a ball together': Pele pays his tribute to Maradona

Despite his fair share of controversies, Maradona was hailed as one of the majestic footballers to have graced the football pitch and his left-foot is still admired by many elite footballers.