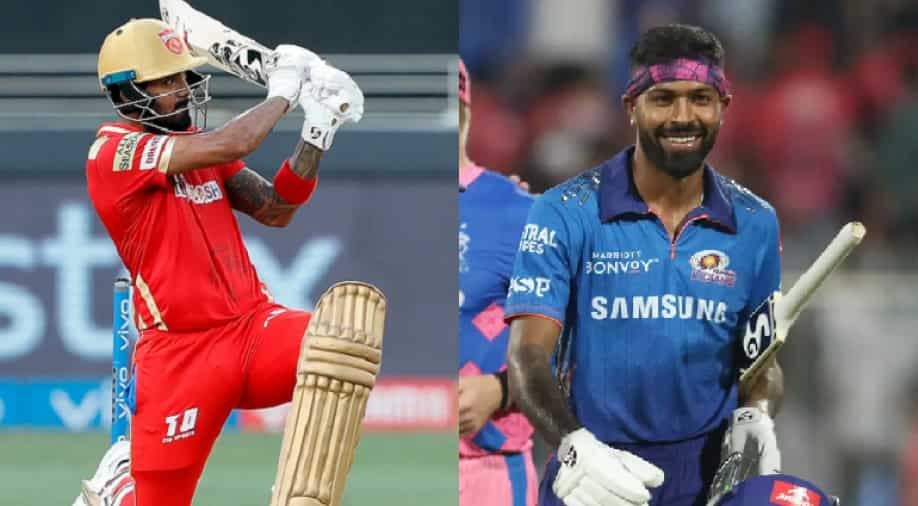 KL Rahul and Hardik Pandya are likely to be released by their respective IPL teams. | Photo - IPL | Photograph:( Others )

Less than 48 hours are left for the deadline for the existing eight Indian Premier League (IPL) teams to submit their final list of retained players ahead of the mega auction. The eight teams can retain a maximum of only four players with no Right To Match (RTM) option available at the mega auction this time around. The deadline for retention is November 30.

While the old teams can retain four players each, the two new franchises - Lucknow and Ahmedabad can pick three players each from the pool of non-retained players. The existing franchises can retain a maximum of three Indian and two overseas players among their retentions while the new teams can pick not more than two Indian players as part of their three selections.

Top 5 Indian players who might get released by their respective franchise:

Punjab Kings captain KL Rahul is all set to be released by the franchise as per multiple reports. While Punjab Kings would have liked to keep their biggest superstar, Rahul himself had expressed his desire to leave the side seeking a new challenge.

The vice-captain of the Indian T20 team has been one of the most consistent performers with the bat in the IPL over the years and is likely to be targeted by the two new teams for a leadership role. Rahul has 3272 runs to his name in 94 IPL matches at an average of over 47.

Mumbai Indians all-rounder Hardik Pandya is likely to be released by his franchise, as per reports. With doubts over his bowling abilities, Hardik, who has struggled with injuries might join a new IPL team ahead of the mega auction. If he is not picked by any of the two new sides and heads into the auction pool, Hardik is likely to create a bidding war at the mega auction.

Hardik has played an instrumental role in Mumbai Indians' success over the last few seasons and has 1476 runs and 42 wickets to his name in 92 games in the IPL.

The former Delhi Capitals captain is likely to join a new franchise ahead of the new season as he has reportedly expressed his desire to leave his current team. As per reports, Iyer wants a leadership role and with DC set to keep Rishabh Pant as captain, he has decided to part ways with the franchise.

Iyer led DC to their first-ever final in IPL 2020 season and was a consistent run-getter for the team. He has played 87 IPL matches so far with 2375 runs to his name at an average of 31.66.

Sunrisers Hyderabad (SRH) are reportedly looking to retain only two players ahead of the mega auction - captain Kane Williamson and ace spinner Rashid Khan. Senior Indian fast bowlers Bhuvneshwar Kumar is likely to be released by the franchise and is expected to trigger a bidding war at the mega auction.

A regular member of India's white-ball teams, Bhuvneshwar is one of the most experienced pacers in the tournament. He has played 132 IPL matches so far and has 142 wickets to his name at an economy of 7.30.

Mohammed Shami was the fifth-highest wicket-taker in the IPL 2021 with 19 wickets in 14 matches for Punjab Kings. However, Punjab Kings are reportedly planning to retain none of the players from their current squad which might see Shami head to the auction table.

Shami will be one of te most sought-after Indian pacers at the mega auction and can fetch a decent contract. He has 79 wickets in 79 matches in his IPL career and has an economy of 8.62.