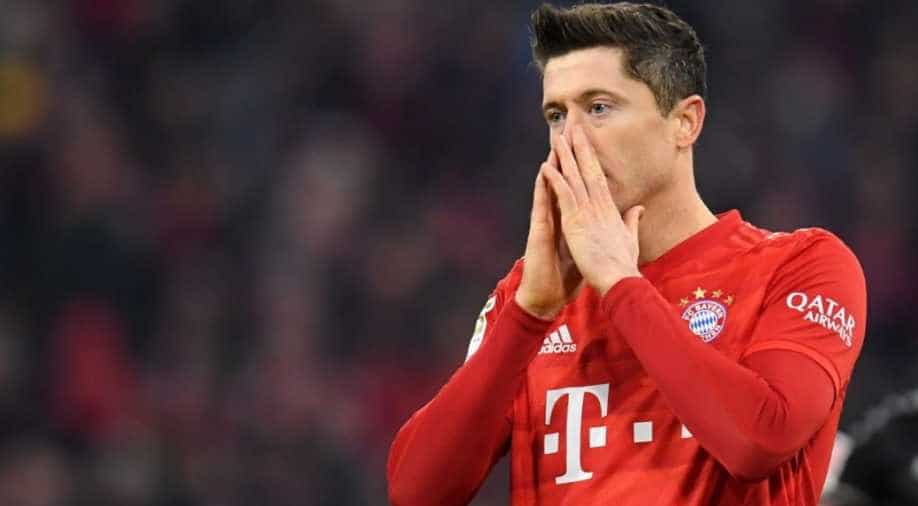 With one game left Lewandowski, the Bundesliga's top scorer in six of the last eight years, can set a new record against Augsburg on Saturday.

Robert Lewandowski can break Gerd Mueller's 49-year-old Bundesliga single-season goal record this weekend when champions Bayern Munich play in front of their home fans for the first time since March 2020.

The Poland striker's penalty in Bayern's 2-2 draw at Freiburg last time out saw him equal Mueller's record of 40 goals in a single Bundesliga campaign, set in 1971/72.

With one game left Lewandowski, the Bundesliga's top scorer in six of the last eight years, can set a new record against Augsburg on Saturday.

"Nevertheless, I hope things stay as they are, because Gerd Mueller was my idol."

With a ninth straight league title already confirmed, Bayern will lift the Bundesliga trophy after the final whistle.

There will also be a farewell for last season's treble-winning coach Hansi Flick, hotly tipped to take charge of Germany after Euro 2020.

Likewise, defenders Jerome Boateng and David Alaba, whose contracts have not been renewed, will play their last game after more than a decade with Bayern.

Alaba is expected to join Real Madrid and leaves with a joint-record of 10 Bundesliga titles under his belt, while Boateng, 32, needs a new club.

For the first time since the Covid-19 pandemic hit Germany 14 months ago, fans will return to the Allianz Arena with just 250 allowed into the 75,000-capacity stadium.

Health workers will get 100 tickets with the rest shared between supporters and staff.

With infection rates dropping across Germany, other Bundesliga clubs can also welcome back small numbers of fans.

Union Berlin, on the verge of qualifying for the new Europa Conference League, will allow 2,000 spectators for Saturday's home game against RB Leipzig, who are already confirmed as runners-up.

The top four places are decided with Bayern, Leipzig, Dortmund and Wolfsburg assured of Champions League football next season.

However, things are tight at the other end of the table with two points separating Cologne, Werder Bremen and Arminia Bielefeld, the three clubs fighting to stay up above Schalke, who are bottom of the league and already relegated.

To stand a chance of avoiding automatic relegation, second-from-bottom Cologne must beat Schalke.

Bremen, who sacked head coach Florian Kohfeldt last Sunday, are 16th, which carries a relegation play-off next week against the club who finish third in the second division.

Bremen played the two-legged play-off for last year, squeezing past second-tier side Heidenheim on away goals.

Bielefeld are 15th, but they must win at Stuttgart to be sure of not getting dragged into the bottom three.

One to watch: Erling Braut Haaland

The towering Norway striker can bag his 40th goal in all competitions this season for Dortmund at home to Bayer Leverkusen.

The hosts are on a roll, winning their previous six league games to qualify for the Champions League as well as thumping Leipzig 4-1 in the German Cup final.

Dortmund winger Jadon Sancho, who has bagged four goals and two assists in three games, will be looking to press his claim for a place in England's Euro 2020 squad.

430: Appearances David Alaba has made for Bayern Munich over the last 11 years, having come through the club's academy.

28: Number of Bundesliga games Lewandowski has needed to score 40 goals this season, while Gerd Mueller achieved the same tally over 34 matches.

7: Trophies Flick has won during 18 months at Bayern Munich, losing just eight of his 85 matches in charge, with 69 wins.