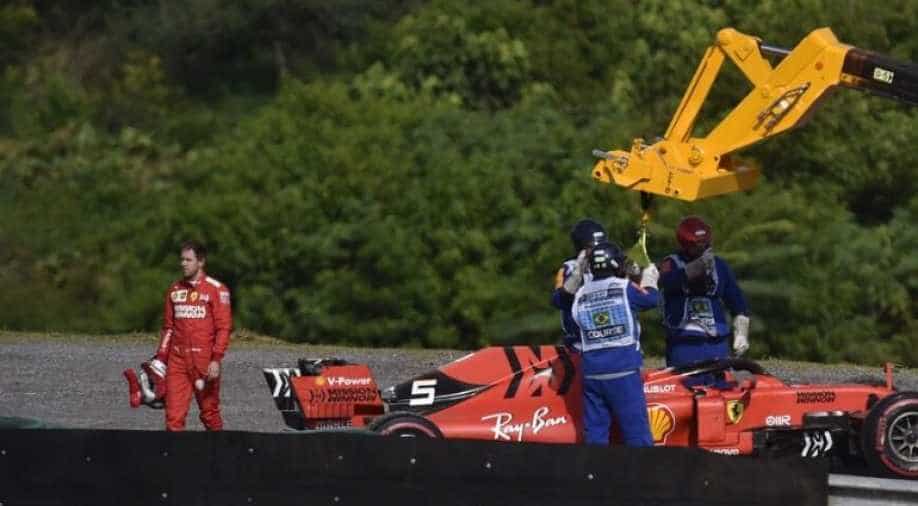 Ferrari's German driver Sebastian Vettel reacts while a crane lifts his car during the F1 Brazil Grand Prix, at the Interlagos racetrack in Sao Paulo, Brazil on November 17, 2019. Photograph:( AFP )

Ferrari is to launch an investigation into the conduct of Vettel and Leclerc, who have been summoned to the company’s Maranello headquarters.

Ferrari boss Mattia Binotto described the collision of Ferrari cars on Sunday’s Brazillian Grand Prix as “silly”. Their drivers Charles Leclerc and Sebastian Vettel collided in a small crash, taking them both out of the race and leaving the team with big consequences.

Binotto said that Sunday’s “mistakes were the mistakes of the drivers”, however, no fines or blame are to be handed out but the priority is going to be on making the drivers realise their mistakes and learning from them.

“I have heard from both drivers, but I will meet with them to discuss what happened. There will be time for the team to analyse the video and data. It is not a matter of fining or blaming,” Binotto said.

Ferrari is to launch an investigation into the conduct of Vettel and Leclerc, who have been summoned to the company’s Maranello headquarters, prior to the season-ending race in Abu Dhabi next week.

The crash comes after 20 races and has left Binotto to deal with the situation to make sure that the highly combustible pairing does not derail Ferrari from its 2020 campaign.

"What happened today, I would say it was even lucky it happened this season because there will be an opportunity to clarify with them for it not to happen next year," Binotto said.

The collision happened on lap 66 of the race, with five more left while the team was competing for the fourth place in a queue of cars being lined up behind Red Bull's Max Verstappen, Lewis Hamilton's Mercedes and Red Bull's Alexander Albon.

Leclerc overtook Vettel through turn one and when the German came back at him, they clashed on the track, ripping Lecrec’s tyre off the rim and giving Vettel a right rear puncture, which put them both out of the race.

It is the first time the pair has hit another in this season, while Binotto has been trying to manage the inevitable situation which is stemmed in Lecrec outperforming Vettel’s superiority with seven wins and two poles.

Vettel chose not to make public statements regarding the incident and answering questions by saying that "It doesn't matter now...we both didn't finish the race, which is bad for us as a team."

While Leclerc made the statement that “I was aware he was on the outside. I left little space but enough for him and then I think he tried to squeeze me a little bit towards the inside and we were very close so we touched straight away. Very disappointing to end a race like this."

"Currently they have good relations and are going well together. Certainly what happened today may not help. But I don't think there is a drama at all and I see it more as an opportunity in view of next year to clarify what is needed," Binotto told reporters after the race.