Did Novak Djokovic attend social events despite being COVID-19 positive? See these pictures 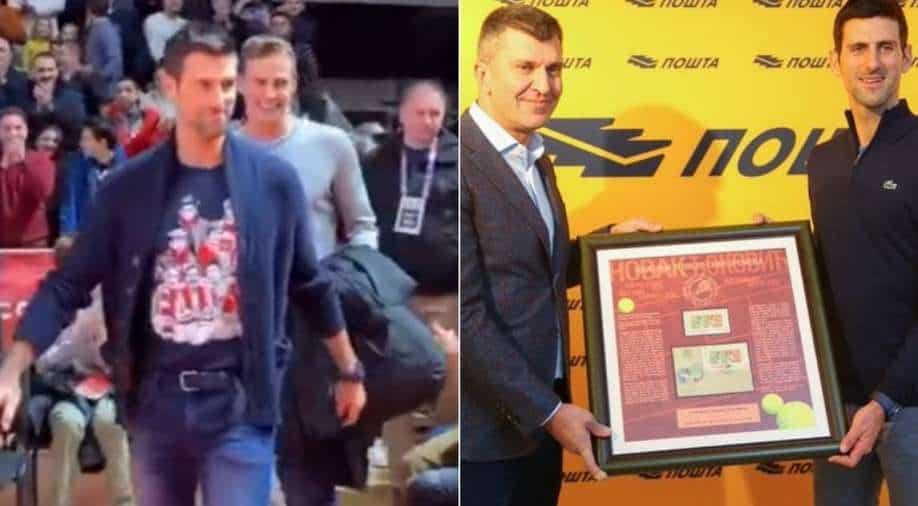 The documents added that the positive test provided the basis for the medical exemption he got. Photograph:( Twitter )

Lawyers of tennis world number one Novak Djokovic on Saturday (January 8) said that the player was granted a vaccine exemption to enter Australia as he was contracted with coronavirus (COVID-19) infection on December 16.

As per the court documents, the Serbian tennis star was tested positive for the virus in mid-December. The lawyers said that the infection allowed him an exemption from Australia's strict Covid rules.

Meanwhile, new pictures have emerged on social media of his appearances at public events without wearing a face mask. The pictures are allegedly have been taken during the same time when his lawyers stated that he had a Covid infection.

The court documents have revealed that Djokovic’s Covid infection was recorded by the Institute of Public Health of Serbia on December 16.

The documents added that the positive test provided the basis for the medical exemption he got from the Tennis Australia and Victorian state government medical panels.

His official Twitter handle had tweeted images of him attening some event in mid-December at the Serbian National Postal Service to commemorate his own Serbian stamp. It's not clear when exacty the pictures were taken but they were posted by Novak's Twitter handle on December 17.

A report by The Guardian stated that Djokovic had attended a Euroleague basketball match between Red Star and Barcelona.

Important to note that in Serbia, the rules require 14 days of self-isolation in case COVID-19 positive.

ALSO READ | Djokovic's lawyers reveal he had COVID-19 a month ago, had recieved clearance to enter Australia

An honor to receive my very own Serbian stamp. Thank you to my generous country for this rare gift! I’m humbled!! Excited to share we’ll partner with the Serbian National Postal Service on @novakfoundation projects for every child to have the opportunity to attend preschool 🙏🏼 pic.twitter.com/Ww8Zma95NU

Novak Djokovic tested positive for covid-19 on December 16, the day he attended a maskless ceremony for the launch of a stamp in his honor — and after being in attendance for KK Crvena Zvezda’s Euroleague basketball match in the previous night: pic.twitter.com/cKAo8GnC6e

The 34-year-old Djokovic was held at the airport on Wednesday after the authorities revoked a visa granted on the basis of a medical exemption from Australia's strict vaccination requirements.

So far, he has opposed mandatory vaccinations and was widely criticised in 2020 for hosting a tournament as the pandemic was first raging.

The Australian Open begins on January 17. The Serbian player look to defend his Aus Open title and also bid to win an unprecedented 21st Grand Slam.