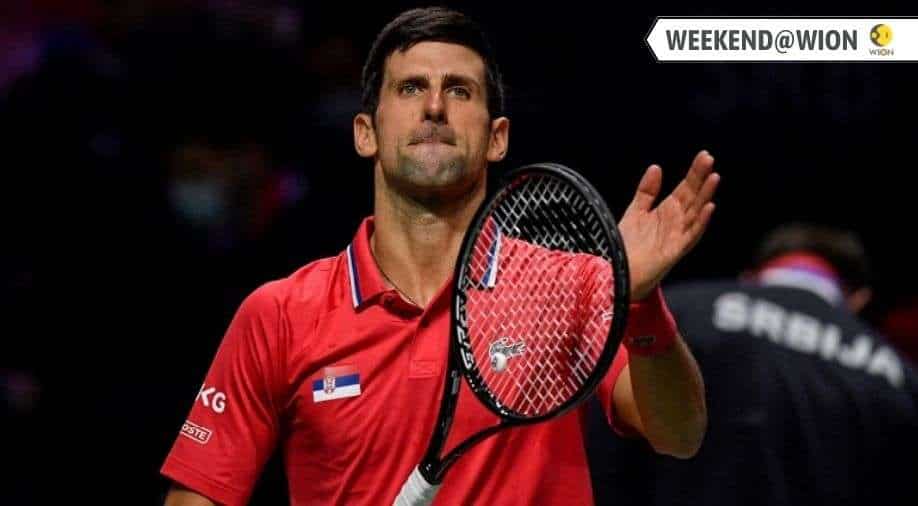 Novak Djokovic prepares for a legal battle as he remains in detention in Australia. Photograph:( AFP )

Novak Djokovic's legal team on Saturday filed a 35-page document in the Federal Circuit and Family Court of Australia, challenging the authorities' decision to revoke the visa of the tennis world no.1 ahead of the Australian Open. We take a look at how and why was Djokovic granted a 'medical exemption' to take part in the tournament despite being unvaccinated against COVID-19.

Novak Djokovic has spent three days in immigration detention in a hotel in Melbourne after his visa was revoked on arrival in Australia ahead of the Australian Open. Djokovic, who has refused to reveal his COVID-19 vaccination status ahead of the tournament, had earlier this week announced that he was heading Down Under to play after being granted a 'medical exemption'.

However, the world no.1 tennis player's claim for medical exemption was rejected by the border officials in Melbourne on Wednesday night before he was placed in isolation in a hotel in Melbourne. Djokovic had last year expressed his reservations about taking part in the Australian Open this month as he had remained silent on his vaccination status.

The Australian Open rules state that all players who are to take part in the tournament along with the fans attending the matches should be vaccinated against coronavirus. However, those who are unvaccinated can obtain an exemption on the basis of medical grounds. The exemption can be granted only by an 'independent panel of medical experts'.

Djokovic and his legal team has claimed the tennis star had his medical exemption approved from two independent panels. Djokovic's lawyers revealed the tennis player had tested positive for COVID-19 in December last year and thus was eligible for a medical exemption as he could not have been vaccinated for at least the next six months after contracting the virus.

What are the circumstances based on which a medical exemption can be granted?

Those with mental and physical developmental disorders are also eligible to be exempted from the mandatory vaccination rules.

Also Read: Djokovic's lawyers reveal he had COVID-19 a month ago, had recieved clearance to enter Australia

Why was Novak Djokovic granted a medical exemption?

Djokovic's lawyers on Saturday stated in their 35-page document lodged in the Federal court of Australia that the Serbian ace had tested positive for COVID-19 in December last year. The documents showed that he had tested positive on December 16 and was free of any symptoms for three days by December 30. He was thus granted a medical exemption on the basis that he had recently recovered from COVID-19 and was not eligible to get vaccinated for at least the next six months.

Djokovic's legal team have also presented proof of a letter that the tennis player had recieved from the Department of Home Affairs confirming that he met all the requirements for a quarantine-free arrival in Australia. However, his visa was torn apart upon arrival as his exemption was deemed invalid.

What next for Novak Djokovic in Australia?

Djokovic has decided to extend his stay in Australia and fight a legal battle against the authorities. He has challenged the decision to revoke his visa and is prepared to drag the authorities to the court to ensure he gets to defend his Australian Open title when the tournament gets underway from January 17.

Contrary to the claims that he has been held captive in a Melbourne hotel, the Australian government has maintained the Serbian player is free to leave the country at any point in time. However, it's Djokovic's decision to stay on and fight for what he believes is unfair against him as he had all pre-required approvals before travelling to the country.

The case is Djokovic V Minister for Home Affairs will be heard in court on Monday (January 10) as Djokovic's legal team continues its bid to challenge the decision to rekove the tennis star's visa despite him having 'valid visa' and 'medical exemption' - a letter from Tennis Australia`s Chief Medical Officer which permitted him entry into the country despite not being vaccinated against COVID-19.

Djokovic, a ten-time Australian Open champion is currently gunning for his 21st major title which will see him go past the legendary Roger Federer and Rafael Nadal. Djokovic is currently tied with Federer and Nadal, who have won 20 Grand Slams each.