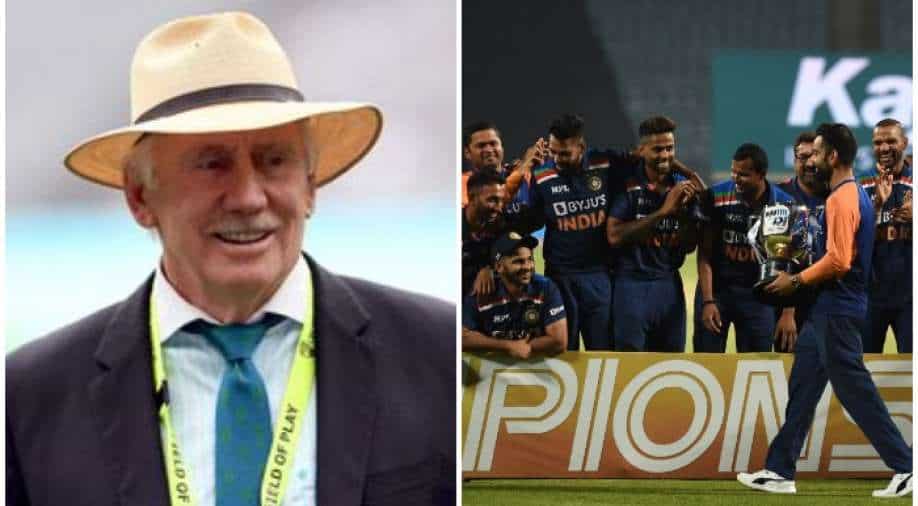 Following India’s stunning clean-sweep of the England tour where the Virat Kohli-led outfit won the Test, T20I and ODI series, former Australia captain Ian Chappell has sounded a warning to other teams saying India are on their way to dominance.

Following India’s stunning clean-sweep of the England tour where the Virat Kohli-led outfit won the Test, T20I and ODI series, former Australia captain Ian Chappell has sounded a warning to other teams saying India are on their way to dominance.

Chappell is of the view that the emergence of young talents well equipped to take on the world’s best strikes a note of fear. The former Aussie skipper heaped praise on the Indian team while lauding their ability and confidence to fight in overseas conditions as well.

“India’s recent successes in Australia – particularly the latest one – have only reinforced the players’ belief in their ability to win under any circumstance. In an era where teams struggle overseas, India now has the depth of talent to alter that pattern. No longer can opponents afford to say, when India are on their doorstep, ‘Just pick a string of fast bowlers with long run-ups and the series will be ours’,” Chappell wrote in his column at ESPNcricinfo.

Chappell then answered one of the most asked questions, can India carry on with their dominance for years?:  “‘Can India replicate the dominant periods of West Indies and Australia?’: “India have finally got the equation right and as long as they avoid the pitfalls often associated with continuing success, they are better equipped than any team to produce an era of dominance. The rest of the cricketing world beware. The emergence of such talents as Shubman Gill, Mohammed Siraj, Navdeep Saini, Washington Sundar, T Natarajan, and Axar Patel would have been monumental if it had happened in the space of three years, let alone just three months as it did.

“And when you consider that Shardul Thakur excelled in just his second game and the ebullient Rishabh Pant was an international match-winner before his 20th appearance, it really is a rosy picture. A rosy picture, that is, if you’re an Indian fan; for the rest of the cricket world, it strikes a note of fear,” Chappell concluded.

India defeated England 2-1 in the three-match ODI series to wrap up the season on a high. The focus will now shift on the Indian Premier League (IPL) 2021, scheduled to start from April 9.