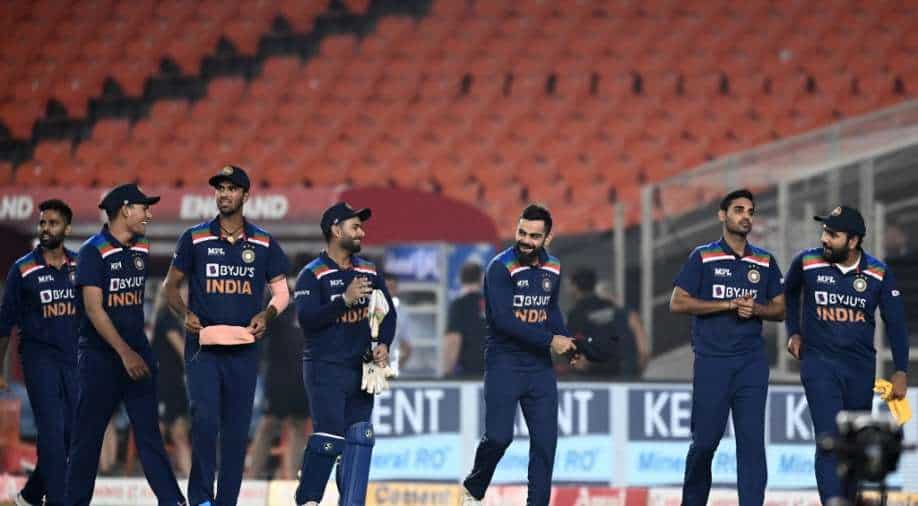 India's captain Virat Kohli (C) along with his teammates walks back to the pavilion after their win in the fourth Twenty20 international cricket match against England at the Narendra Modi Stadium in Motera on March 18, 2021. Photograph:( AFP )

India beat England by seven runs on Sunday to clinch the one-day international series 2-1 despite a courageous unbeaten 95 from Sam Curran.

India beat England by seven runs on Sunday to clinch the one-day international series 2-1 despite a courageous unbeaten 95 from Sam Curran.

England, who had already lost the Test and Twenty20 series, bowled out India for 329 with 10 balls to spare in Pune.

England looked on the ropes at 200 for seven, but Curran equalled the highest ODI score by a batsman coming in at number eight or lower.

England sent out the order that Curran was to be given the strike as much as possible for the closing overs as they hoped for an unlikely win.

But, needing 14 to win off the final six balls, Curran came up against a disciplined effort from T. Natarajan who gave away just one boundary.

Indian seamers Shardul Thakur and Bhuvneshwar Kumar shared seven wickets between them as England finished on 322 for nine.

England's top order failed to build partnerships. Kumar sent back openers Jason Roy, for 14, and Jonny Bairstow, for one, in the first three overs.

Ben Stokes, who survived a dropped catch by Hardik Pandya on 15, fell to Natarajan for 35 and Thakur trapped Buttler lbw for 15.

Dawid Malan and Liam Livingstone put on 50 for the fifth wicket but Thakur had Livingstone caught and bowled for 36.

"We're disappointed, we came here and we wanted to win, but there have been great learnings throughout the whole process," said Buttler, who praised Curran as one of the new generation making their mark in the England side.

"Sam keeps showing what a match-winner he is. He is still only 22 and the scope of where he can take his game to is massive so we are all very excited for him."

Curran put on 57 for the eighth wicket with Adil Rashid, who was superbly caught by Virat Kohli in the covers, and then 60 for the ninth wicket with Mark Wood, who made 14 before being run out in the final over.

The left-hander, who was dropped on 22 and 87, hit nine fours and three sixes in his 83-ball knock.

India started strongly with a 103-run opening stand between Rohit Sharma, who scored 37, and Shikhar Dhawan, who hit 67, before Rashid's leg-spin removed both.

Moeen Ali rattled the stumps of Kohli, playing his 200th international as captain, but who has struggled against spin at times during England's tour of India.

The home side were then indebted to Rishabh Pant (78) and Hardik Pandya (64) who put on 99 for the fifth wicket.

Left-hander Pant swatted a six off Rashid to bring up his second successive half-century.

Thakur hit 30 off 21 balls but India lost their final four wickets for eight runs as Wood claimed three wickets, including two in one over.

Kohli said he was "surprised" that Thakur was not named man-of-the-match instead of Curran after his four wickets and 30 runs.

"And Bhuvi (Kumar) another contender for man-of-the-series. These guys were the difference in the middle overs and powerplay."

England's Jonny Bairstow was named man-of-the-series for his 219 runs in three matches including a match-winning 124 in England's chase of 337 in the second ODI.

Kohli's India outplayed England in the four Tests 3-1 and then edged out the tourists 3-2 in the Twenty20 series.