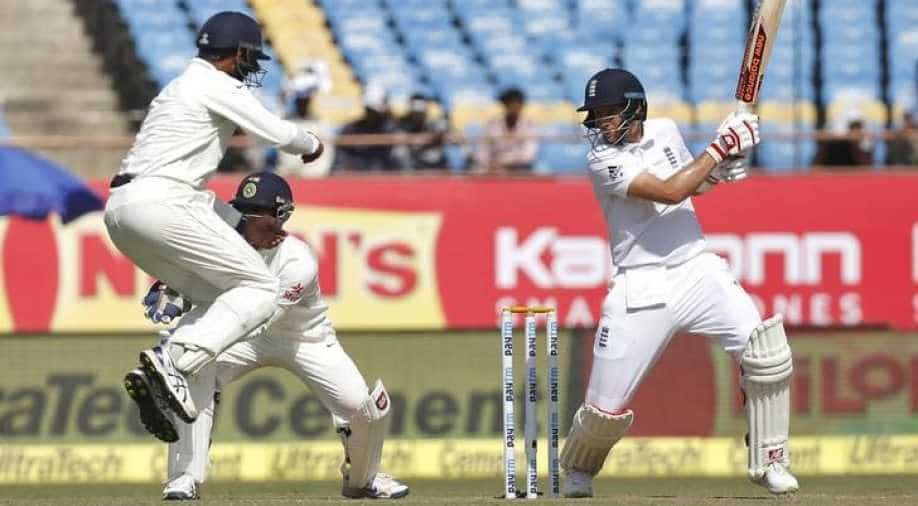 Stylish batsman Joe Root scored a smashing 124 before being pulled down by India's Umesh Yadav on the first day of the opening Test against India on Wednesday.

Root was in top form during his 144-ball knock, which was studded with nine fours, almost replicating his 154 not out against India during the 2014 series.

The 25-year-old right-hander shared a 107-run stand with Moeen Ali, who was on 48, to take England to 209-3 at tea at the Saurashtra Cricket Association ground in Rajkot.

The unbroken stand for the fourth wicket steadied England after the visitors were reduced to 102-3 in the first session.

Root, who struck his 24th Test half-century and fifth against India, survived a review for lbw after replays showed an inside edge, while the left-handed Ali also frustrated the Indian bowlers.

Nothing seemed to go India's way in the afternoon as leading seamer Mohammed Shami limped with a likely hamstring injury.

The opening session saw Haseeb Hameed, 19, become the youngest player to open the batting for England on debut.

The youngster, dubbed "Baby Boycott" for his unflappable style, made 31 during his 98-minute stay at the crease before falling lbw to world number one-ranked spinner Ravichandran Ashwin (2-60).

Ashwin also dismissed Ben Duckett for 13 after skipper Alastair Cook elected to bat on what seemed a placid wicket.

Hameed as well as Cook (21) benefited from the largesse of India's fielders who were guilty of dropping some early chances.

Cook was dropped off Shami off the third ball of the innings while Hameed got a reprieve on 13 when Murali Vijay grassed his catch at first slip.

The England skipper, who surpassed Michael Atherton's record of 54 Tests as England captain, was adjudged leg before off left-arm spinner Ravindra Jadeja (1-42).

TV replays showed the ball would have missed the leg stump but Cook did not refer to the third umpire even though the decision review system is being used for the first time by India in a home series.

Hameed showed little sign of nerves against top-ranked India, twice hitting Shami for boundaries in an over and driving Ashwin for an elegant four in the covers.