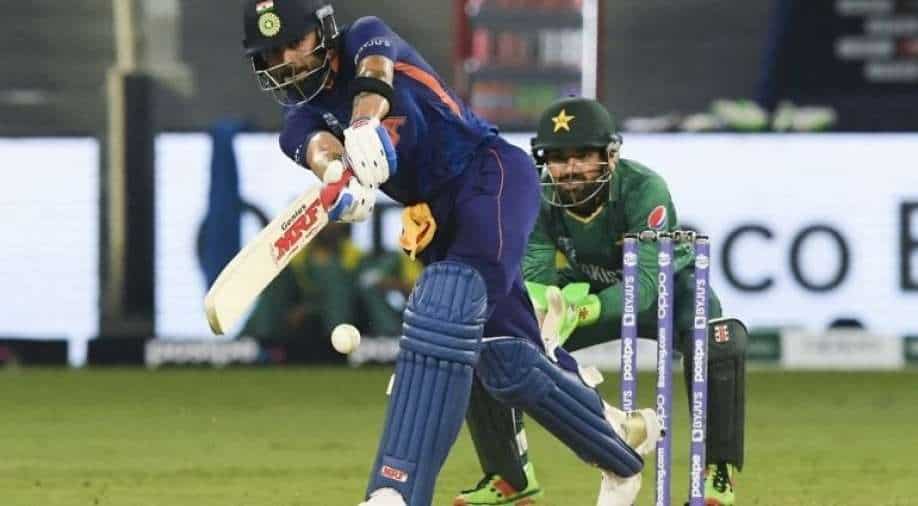 India lost their first-ever game to Pakistan in a World Cup during their tournament-opener in T20 World Cup 2021, at the Dubai International Cricket Stadium, Dubai.

On Sunday (October 24), India finally locked horns with Pakistan for the first time, across formats, after two years in what was both sides' tournament-opener in the Super 12 round of the T20 World Cup 2021, being held in the UAE.

With India leading Pakistan 12-0 in head-to-head tally in World Cups (both ODIs and T20Is), the Men in Blue were expected to move past Babar Azam-led Pakistan in match 4 of Super 12, at the Dubai International Cricket Stadium, Dubai. However, Virat Kohli & Co. lost to Men in Green by a whopping 10-wicket margin to concede their first-ever game to their arch-rivals in WC history.

Thus, Kohli achieved the unwanted record to become India's first-ever captain to lose a match to Pakistan in World Cup history. However, this isn't the first time India have lost to Pakistan in an ICC event, with the trio of Sourav Ganguly, MS Dhoni and Kohli having lost a game each as captains in the Champions Trophy (2004, 2009 and 2017 respectively).

After the match, Kohli reflected on the loss and told at the post-match presentation, "We didn't execute properly. Credit where it's due and Pakistan outplayed us today. They started brilliantly with the ball, and 3 wickets for 20 runs was not a good start. We needed wickets early but with the bat they gave us absolutely no chances. It played slow in the first half and hitting through the line was not that easy as it was in the second half, after 10 overs. We needed those 15-20 extra runs an for that we needed a good start but Pakistan's bowling didn't allow us to get those extra runs. We could make the argument of getting in another slower bowler, but it's important to stay composed and understand our strengths, because with the dew the slower bowlers couldn't be effective either. This is just the first game of the tournament, not the last."

Opting to bowl first, Pakistan were led by Shaheen Afridi's early strikes (3 for 31) as India lost both their openers Rohit Sharma and KL Rahul for cheap. While Kohli stood tall (57) and held one end, the likes of Suryakumar Yadav and Rishabh Pant got starts before departing.

This became Pakistan's first-ever ten-wicket win in the format and India's first-ever defeat by the same margin in T20Is.