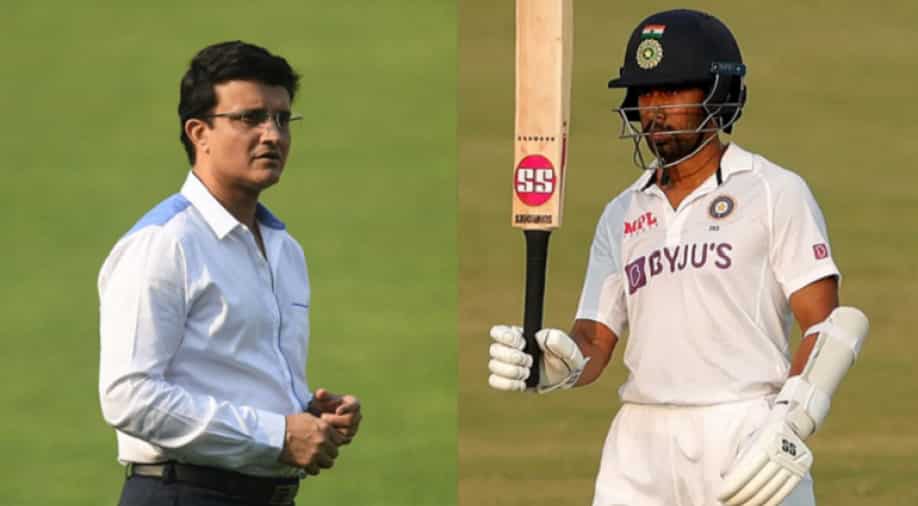 BCCI will investigate Saha's comments and the insulting messages sent by a journalist. | Photo - AFP/BCCI | Photograph:( Others )

The Board of Control for Cricket in India (BCCI) is reportedly set to conduct a thorough investigation after Wriddhiman Saha's tweet revealing threatening messages from a journalist and his explosive comments in recent interviews.

Senior India wicket-keeper batter Wriddhiman Saha recently exposed a 'respected journalist' on Twitter by sharing a screenshot of insulting messages he received from the person after denying an interview. Saha was dropped from India's Test squad for the upcoming two-match series against Sri Lanka at home as the selectors announced the squad last week.

Following his exclusion from the squad, Saha went on to make some explosive claims regarding the Board of Control for Cricket in India (BCCI) president Sourav Ganguly and current India head coach Rahul Dravid. The BCCI has now decided to conduct a 'thorough investigation' into Saha's recent comments and his tweet revealing threatening messages from a journalist.

In the screenshot shared by Saha on Twitter, the journalist can be seen making insulting comments against the senior cricketer. Ever since his post went viral, Saha has received immense support from the cricket fraternity with a number of former cricketers urging him to expose the so-called journalist.

As per a report in the Times of India, BCCI is calling for a 'thorough investigation' in the matter as Saha is a contracted cricketer and the board doesn't want to let it's player down. The BCCI will also investigate the wicket-keeper batter's comments about receiving messages of assurance from board president Sourav Ganguly.

"Saha is a contracted cricketer of the BCCI. The onus is on the Board to not let its own player down. That aside, if there is any kind of a nexus at work here, one has to look into it," officials tracking the development told TOI.

Also Read: Time for Sourav Ganguly to step in: Ravi Shastri 'shocked' as Saha threatened by a journalist

As per the report, the BCCI will approach Saha for the WhatsApp messages and a forensic investigation will be conducted. If the person who sent the messages is found to be an actual journalist covering Indian cricket, he will be banned by the board. The board is also determined to find out if there are other cricketers who have had to go through similar situations.

"If the sender of those messages indeed happens to be a journalist covering Indian cricket, the Board will take steps towards banning him. It is also important to see if anybody else has gone through this," an official was quoted as saying by TOI.

The board official also stated that BCCI president Ganguly's comments will be investigated as well. The official questioned in what capacity did the BCCI president gave assurance to a player about his spot in the Indian Test team.

"The Rahul Dravid-bit is understandable. He's the national coach and may have wanted to keep his players in the loop. That's between the coach and the players. What was the need for a BCCI official to speak with Saha and assure him of a place in the side? 'I don't need to worry till he's there'. Kitni galat baat hai yeh (How wrong it is to say something like this)," officials told TOI.

In an interview with ESPNCricinfo, Saha revealed he had received a congratulatory message from Ganguly after his 61-run knock in the first Test against New Zealand in Kanpur, in November last year. The wicket-keeper batter claimed that Ganguly had assured him that his spot in the Test side is safe till the time he is the president of BCCI.

"The biggest shock was that when I scored 61 against New Zealand in Kanpur despite being injured, Dadi (as BCCI president Sourav Ganguly is referred to), texted to congratulate me and said I didn't need to worry about anything till he is there. Naturally, I was shocked at what I was told immediately one series after," Saha, who was dropped from the Test squad on Saturday, told ESPNCricinfo.