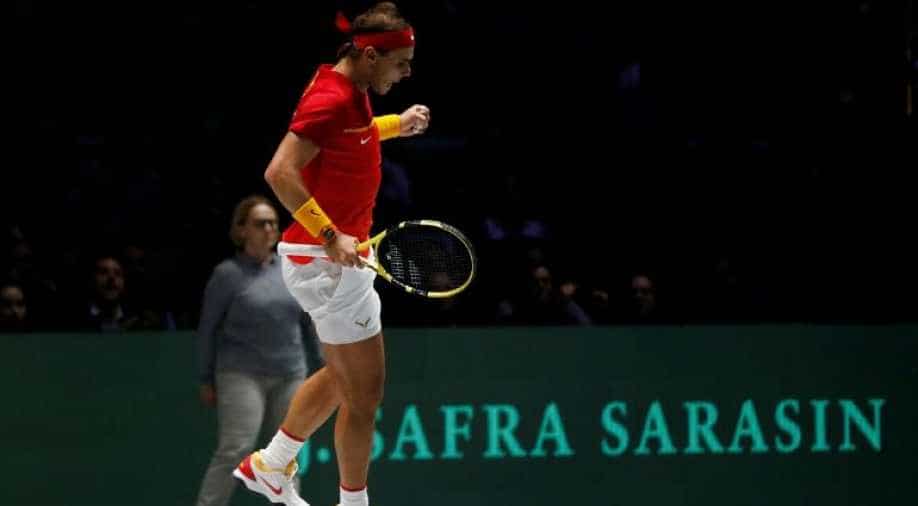 The Davis Cup has a new format but Andy Murray's love of a comeback remains intact after the Scot battled from behind to beat Tallon Griekspoor on Wednesday as Great Britain edged past Holland.

"I've found a way to win matches many times in my career when I've not been playing well," Murray said. "You can draw on that a little bit."

A scrappy victory gave Great Britain the lead in their opening Group E tie and while Dan Evans lost the second singles rubber to Robin Haase, Jamie Murray and Neal Skupski finished the job in the doubles.

Rafael Nadal won his 26th consecutive Davis Cup singles match later on Wednesday as Spain booked their place in the quarter-finals with a 3-0 victory over defending champions Croatia.

Murray had given short shrift on Tuesday to those he believes have been too quick to criticise the revamped Davis Cup, which for the first time is featuring all 18 World Group countries competing for the trophy across a single week in one venue.

And in what will be music to the ears of the organisers, among them Barcelona footballer Gerard Pique, Murray was full of praise for the atmosphere inside the Caja Magica's cosy Stadium 3.

"The atmosphere was brilliant," Murray said afterwards. "That was the one concern I had about the event, about it being on neutral ground, but it was great."

British fans have been second only to Spanish in terms of tickets sold so far and the strong attendance for Murray's opener inside the tournament's smallest court, with a capacity of 2,500, has not been consistent across other morning matches.

Murray, along with Nadal and Djokovic, is one of the competition's biggest attractions this week and Britain's prospects of progressing to the quater-finals look good ahead of Thursday's tie against Kazakhstan.

It remains to be seen whether Murray plays or is rested against the Kazakhs but he was given a stiff workout by the 23-year-old Griekspoor, who was a surprise pick in the Dutch team ahead of Botic Van de Zandschlup.

"About an hour before the match it changed," said Murray. "I didn't know much about his game."

But Murray again dug deep, his experience and resilience proving the difference as Griekspoor lost his nerve and then the match.

Djokovic enjoyed a more comfortable start as he cruised to a 6-1, 6-2 victory over Nishioka in a straightforward win for Serbia against Japan.

Serbia will play France on Thursday to decide who goes through as winners of Group A.

"It's probably one of the biggest challenges we can have in this competition, playing against France, one of the most successful nations in Davis Cup, and definitely one of the strongest teams," Djokovic said.

Argentina could have secured progress by beating Germany but lost all three matches as Philipp Kohlschreiber beat Guido Pella and Jan-Lennard Struff overcame Diego Schwartzman to establish an unassailable advantage. Germany will advance if they beat Chile on Thursday.

Canada are already through and will meet Australia in the last eight on Thursday, after Leyton Hewitt's team beat Belgium 2-1.