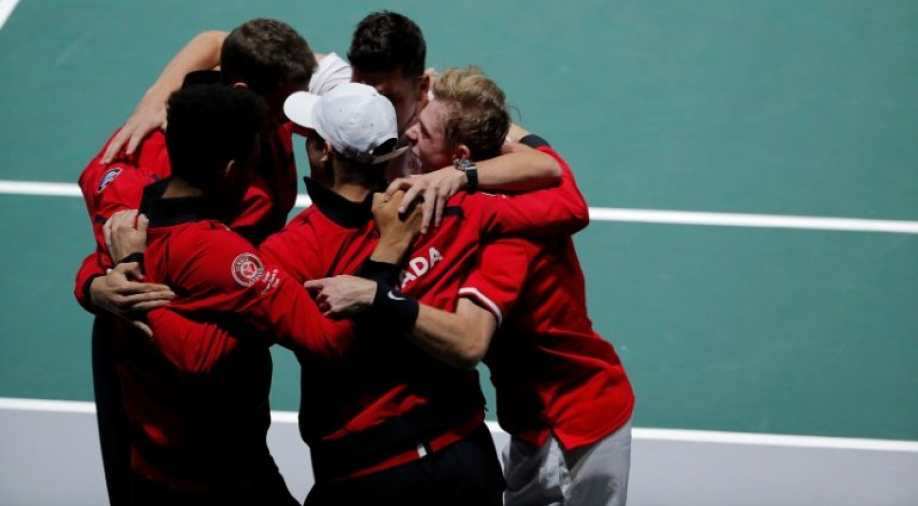 For the second day in a row, 150th-ranked Vasek Pospisil gave them the perfect start before Denis Shapovalov finished the job to make it two wins from two in Group F.

Canada became the first nation to reach the quarter-finals of the revamped Davis Cup on Tuesday after beating the United States for the first time at the 16th attempt.

For the second day in a row, 150th-ranked Vasek Pospisil gave them the perfect start before 20-year-old Denis Shapovalov finished the job to make it two wins from two in Group F.

Pospisil, who upset the rankings to beat Italy's Fabio Fognini in their opening tie, edged out towering American youngster Reilly Opelka 7-6(5) 7-6(7) to the delight of a vocal Canadian contingent in the stands.

"Canada is really in the best place it's been in tennis history," Pospisil told reporters.

"We have incredible young talents in Denis, Felix (Auger Aliassime), Bianca (Andreescu), and then some older guys... myself now and Milos (Raonic). It's just currently right now we're on a run and we have tons of great players."

Shapovalov, who reached the Paris Masters final this month and has risen to 15th in the rankings, then beat Taylor Fritz 7-6 6-3 to seal the win.

The doubles rubber was conceded by the Canadians as three of their players were declared unfit to play, an ITF spokesman said, so the final result was 2-1 to Canada, the same scoreline by which they beat Italy by Monday.

"USA will get one match win and a 6-0 6-0 scoreline in terms of sets and games won. If Italy defeats US, it will have no impact at all," the ITF said in a statement.

"We had a very, very tough two days," he said. "The guys put their hearts on the line out on the court and ... they had some injuries that we didn't want to risk going into the doubles today.

"There was a risk to get hurt going into the practices tomorrow and later on in the week. So it's best to pull out."

The 18 nations taking part at La Caja Magica are split into six groups with the group winners and two best runners-up moving through to the quarter-finals on Thursday and Friday.

Tuesday's clash was the first between the north American neighbours since 1965. Canada had lost the last four meetings, all played under the old five-rubber system, 5-0.

The United States have won a record 32 Davis Cups but none since 2007.