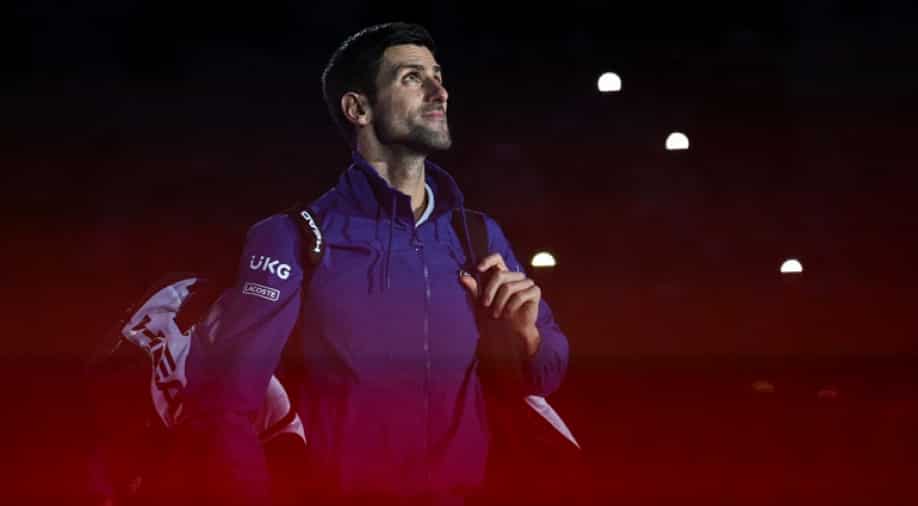 Novak Djokovic returned to training at the Australian Open venue on Tuesday as he prepares to defend his title at the upcoming tournament. Here is a look at the timeline of the events so far in Djokovic's Australian Open visa saga.

Novak Djokovic had his first training session at the Rod Laver Arena on Tuesday as he aims to bag his record 21st Grand Slam. Djokovic has had an eventful last few days in Australia as he finally managed to return to the court after winning a court case against the Australian government's decision to cancel his visa upon his arrival in the country.

Djokovic had landed in Australia last week with a 'medical exemption' to take part in the Australian Open despite not revealing his status of COVID-19 vaccination. He was later detained by the border officials and sent to a detention hotel in Melbourne after it was deemed that he didn't qualify for an exemption.

While he had the option to take a flight back home, Djokovic decided to stay back and fight a legal battle. He won the court case on Monday after Judge Anthony Kelly ordered the visa cancellation decision be overturned and the tennis star to be released from detention from immediate effect.

Here is a timeline of the Australian Open visa saga involving Novak Djokovic:

How did Novak Djokovic land in trouble?

Djokovic, who had previously asserted that he is against mandatory COVID-19 vaccination, refused to reveal if he is vaccinated against the virus. However, the Serbian ace said last week that he was heading Down Under to play in the Australian Open after obtaining a 'medical exemption' from a panel of experts.

However, upon landing in Australia, his visa was revoked and Djokovic was sent into detention for failing to meet the criteria of an exemption. He spent five days in an immigration facility in Melbourne which his family alleged was in poor condition and inhumane.

What happened in the court case on Monday?

Djokovic's legal time filed a case against the decision by the Australian authorities to revoke his visa. In their court filings, Djokovic's lawyers revealed the tennis star had tested positive for COVID-19 in December last year due to which he was granted a 'medical exemption' as he was ineligible for vaccination for the next six months.

The lawyers also stated that Djokovic was sent a letter from Tennis Australia's chief medical officer on 30 December stating that he had been granted a medical exemption. Judge Anthony Kelly ordered the visa cancellation decision be overturned and granted him release from detention in Melbourne.

While the judge ruled the decision in the tennis superstar's favour, Australia's Immigration Minister Alex Hawke has a discretionary personal power to cancel Djokovic’s visa. Hawke is reportedly considering exercising his power which might see Djokovic get deported out of Australia just a week ahead of the start of the Australian Open.

Can Novak Djokovic challenge the decision once again?

If the Australian Immigration minister decides to exercise his power and re-cancel Djokovic's visa, he will be once again sent into immigration detention. Djokovic can challenge the decision in the court as judge Kelly has already asked to be informed immediately if the matter is to be extended once again.

How Did Novak Djokovic react to his court win?

The world no.1 tennis player took to social media on Monday to share a picture from the Rod Laver Arena while expressing his desire to play in the Australian Open and defend his title. Djokovic, a nine-time Australian Open champion also thanked his fans and supporters.

"I'm pleased and grateful that the Judge overturned my visa cancellation. Despite all that has happened, I want to stay and try to compete @AustralianOpen," Djokovic said in a tweet.

"I remain focused on that. I flew here to play at one of the most important events we have in front of the amazing fans. For now I cannot say more but THANK YOU all for standing with me through all this and encouraging me to stay strong," he added.

On Wednesday (January 12), Djokovic also shared issued a clarification on 'misinformation' over his Dec 16 Covid-19 Test, travel declaration. He took to his official Instagram handle and shared a lengthy post saying, "I want to address the continuing misinformation about my activities and attendance at events in December in the lead up to my positive PCR COVID test result.

“This is misinformation which needs to be corrected, particularly in the interest of alleviating broader concern in the community about my presence in Australia, and to address matters which are very hurtful and concerning to my family,” Djokovic said in the statement.

“I want to emphasise that I have tried very hard to ensure the safety of everyone and my compliance with testing obligations.

“I attended a basketball game in Belgrade on 14 December after which it was reported that a number of people tested positive with COVID 19. Despite having no COVID symptoms, I took a rapid antigen test on 16 December which was negative, and out of an abundance of caution, also took an official and approved PCR test on that same day,” he explained.

Novak Djokovic confirmed as the top seed at Australian Open

The visa saga is looking likely to come to an end soon as the Australian Open confirmed the seeding for both men and women's singles events on Tuesday. Djokovic was handed the top billing in the men's category while Ash Barty is the top-seeded women's player in the Australian Open this year.

In a fresh blow to Djokovic's chances of taking part in the Australian Open which gets underway from January 17, the Australian government once again cancelled the tennis superstar's visa on Friday (January 14). Australia's Immigration Minister Alex Hawke used discretionary powers to re-cancel his visa and the Serbian is free to challenge the decision once again by taking the legal route.