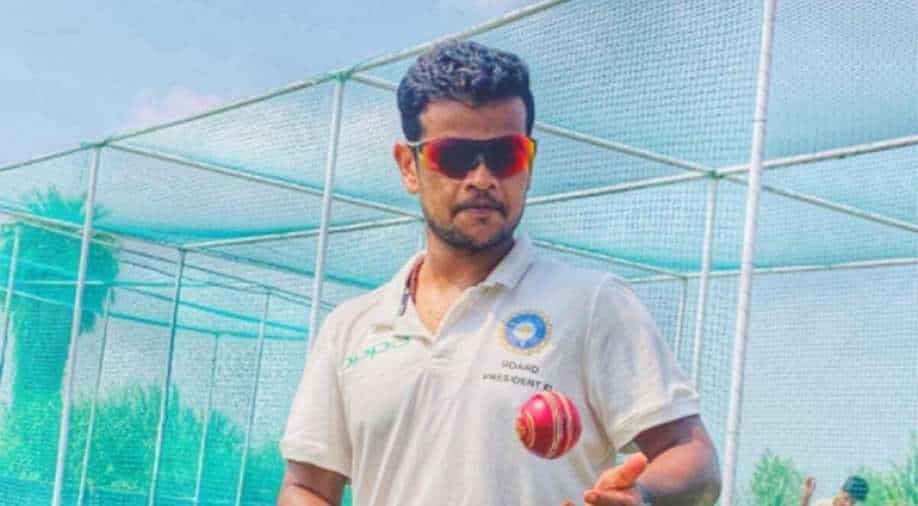 Employed with Indian Air Force on sports quota, Saurabh was at the crossroads. He had a secure central government job with all the perks but his heart pushed him to play professional cricket and earn that coveted India jersey.

Seven years back, the then 21-year-old Saurabh Kumar faced a common career dilemma --- pursue his passion or secure a safe future.

Employed with Indian Air Force on sports quota, Saurabh was at the crossroads. He had a secure central government job with all the perks but his heart pushed him to play professional cricket and earn that coveted India jersey.

"There comes a moment in life when you have to take a decision. Jo bhi ho lena padhta hai," the 28-year-old orthodox left-arm spinner and newest entrant to the Indian Test squad told PTI in an interview.

"It was a tough decision to quit playing Ranji Trophy for the Services. I loved being an Indian Air Force man and part of Indian defence but there was a part of me that felt that I have it in me to work hard and play for India," the cricketer, who hails from UP's Baghpat District said.

ALSO READ: Break from bio-bubble a much-needed one for under-fire Virat Kohli

"I was posted in Delhi. I played for Services in the Ranji Trophy for one year (2014-15 season) when Rajat Palliwal was our captain.

"Since I was a sports quota entry, I didn't have to do any duty apart from play for Services. If I had quit cricket, then I would have had to do full-time duty," he recollected the old days.

Hailing from a middle-class family, his father worked as a JE (Junior Engineer) at the All India Radio. His parents were firmly supportive of his decision to trade profession with passion.

"It is amazing that when I told my parents that I am leaving Air-force job, they didn't for once asked me to reconsider. Both were very supportive of my choice.

"It was my decision to leave IAF but when I saw that parents were supportive, I got a lot of confidence to independently pursue my dream," Saurabh said.

ALSO READ: 'No application of mind': Former selector questions Gaikwad, Sarfaraz's non-selection in India's Test squad
===================
There is something about left-arm spinners that make them special and one of the character traits is the doggedness which Saurabh believes that he had in abundance.

"Now, we stay in Ghaziabad but during those early days of playing cricket in Delhi, it was a big ordeal. In my town Baraut in Baghpat district, we didn't have great coaching facilities. So I had to take a daily train to come to Delhi for my training at National Stadium," he said.

For the uninitiated, Saurabh's coach is Sunita Sharma, the only female cricket Droancharya in India, whose other notable disciple is former keeper Deep Dasgupta.

"If I had a 2:00pm afternoon nets. I left home at 10 am in the morning. It would be a three and half hour train journey and another half an hour to reach the stadium. And same while coming back. It was tough but that's what helped me when I look back," said the man, who had 95 wickets in last two first-class seasons (2018-19, 2019-20).

"When you are 15 or 16 year old, you don't realise. Aap mein junoon itna hota hai, ki kuch bhi aapko mushkil nahi agta hai sir (When you have so much passion, nothing looks difficult)."

"Bedi sir liked what he saw in my bowling. He introduced me to the world of nuance about little things on grip and stuff. No major changes as he liked my action and loved the areas I bowled into.

"One thing that happened during those Summer Camps was I got a chance to bowl hundreds of overs. Bedi sir had one mantra "Mehnat mein kaami nahi honi chhaiye". There should be no short cut to success," he added.

Once he entered the UP age-group teams, it was former state keeper Manoj Mudgal, who backed him a lot and the result is 196 wickets and 1572 runs from 46 first-class games.

"When I was picked for Rest of India, I knew that I am now on the radar of selectors. I had been bowing pretty well and was confident but then it didn't happen and I lost my chance to showcase my talent in Irani Cup."

But he continued working hard.

Life was about to change as he finally got an India A call-up to go to South Africa and played two A Tests in Bloemfontein. He must have impressed the coaches as the senior team then kept him as a stand by bowler for the Test series.

"It was a dream come true as I got a chance to bowl to the senior India players like Virat Kohli, KL Rahul. It was a massive learning curve for me. They gave valuable tips that will help me improve as a bowler."

No IPL bids, no regrets

ALSO READ: 'CSK will try to get him back, no one will expect us': How RCB planned Faf du Plessis' signing at IPL auction
===============
Saurabh was once picked for Rs 10 lakh by Rising Pune Supergiants back in 2017 but this time, days before his maiden India call-up, he went unsold at the IPL auctions. But he has no regrets.

"Not even one percent regret sir. This is life. Zindagi mein upar neeche toh hota rahega. Zaroorat hai toh lage rehne ka (There will be ups and down in life. All you need is to hang on.). I am doing just that," he signed off.