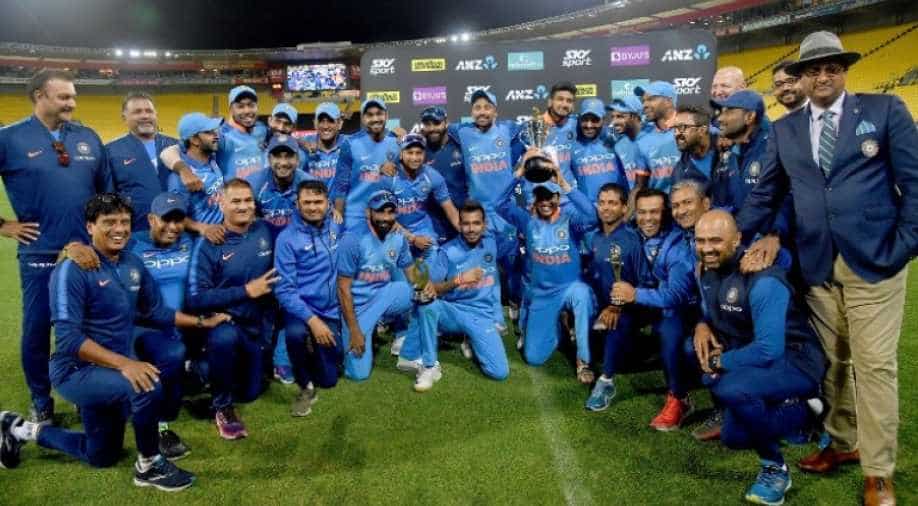 India's bowlers rattled New Zealand's batsmen to win the fifth and final ODI by 35 runs at the Westpac Stadium, Wellington. That also meant they won the ODI series 4-1, having lost the fourth ODI at Hamilton by eight wickets.

It was Jadhav who got Australian skipper Kane Williamson's wicket. Jadhav bowled a low one; Williamson heaved but ended up caught by Shikhar Dhawan near the boundary line.

Shami provided India with the breakthrough in the fourth over to dismiss opener Henry Nicholls as the hosts chased a target of 253 runs. Shami struck again to clean bowl Colin Munro for 24 runs.

Opting to bat, Ambati Rayadu's patient 90 and Hardik Pandya's 45-run cameo powered India to a decent 252 total.  Pandya faced just 22 balls to hit 45 runs which included two boundaries and five sixes. He was caught out while trying to hit a six.

Game Over! #TeamIndia clinch the final ODI by 35 runs and wrap the series 4-1 #NZvIND 🇮🇳🇮🇳 pic.twitter.com/2cRTTnS8Ss

They triumph by 35 runs in the 5th ODI to seal a 4-1 series win. #NZvIND SCORECARD 👇https://t.co/pMY7C9gsJt pic.twitter.com/X9ruPfrxIa

For New Zealand, James Neesham top-scored for his side but was run-out in the most unexpected but brilliant way by wicketkeeper-batsman MS Dhoni.

After clinching the ODI series, India will lock horns with New Zealand in the T20 series, with the first being played on February 6.