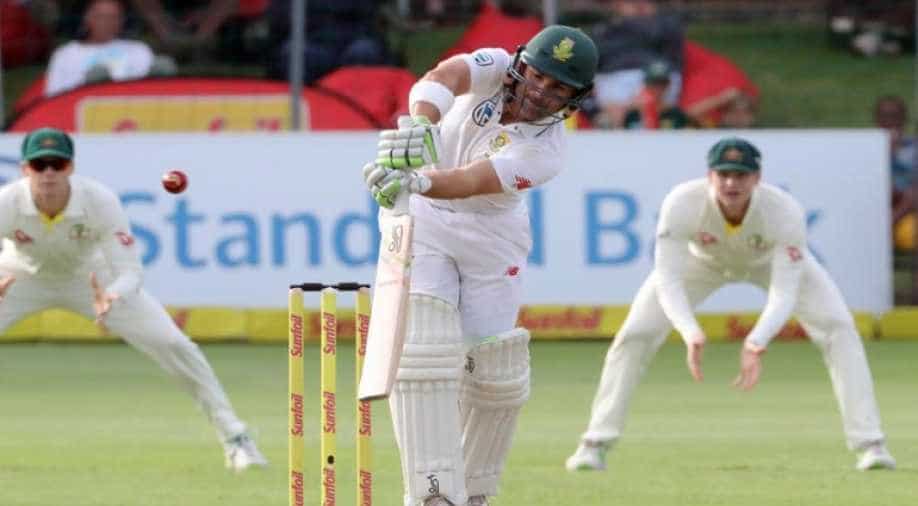 Elgar has put on 43 for the third wicket with Hashim Amla, who has 31 from 71 balls, Photograph:( Reuters )

Opener Dean Elgar edged towards a patient half-century as South Africa reached 110 for two at lunch on the second day of the second test against Australia at St George’s Park on Saturday.

Elgar is 38 not out from 108 balls. He has put on 43 for the third wicket with Hashim Amla, who has 31 from 71 balls, as they reduced Australia’s first innings lead to 133 runs to take the ascendancy in the test.

Having resumed on 39 for one, it was a fruitful morning for Proteas, who only lost nightwatchman Kagiso Rabada for 29 when he played onto his stumps from a Pat Cummins, 2-23 delivery.

There were few alarms from the wicket, which did not provide the same seam movement that South Africa enjoyed on the first day when they restricted Australia to 243 all out.

Amla was given out leg before wicket early in his innings by umpire Sundaram Ravi off a Cummins delivery, but successfully reviewed the decision when it was revealed the ball had struck him outside the line of the stumps.

Australia battled to create opportunities to take wickets, though spinner Nathan Lyon did find good turn off the wicket and was difficult to score off.

His further participation in the series is in doubt though after it was revealed on Saturday that he had been charged with a Level Two offence by the International Cricket Council (ICC) with a hearing to be staged on Saturday evening.