Under new law, Myanmar protesters to face up to 20 years in prison 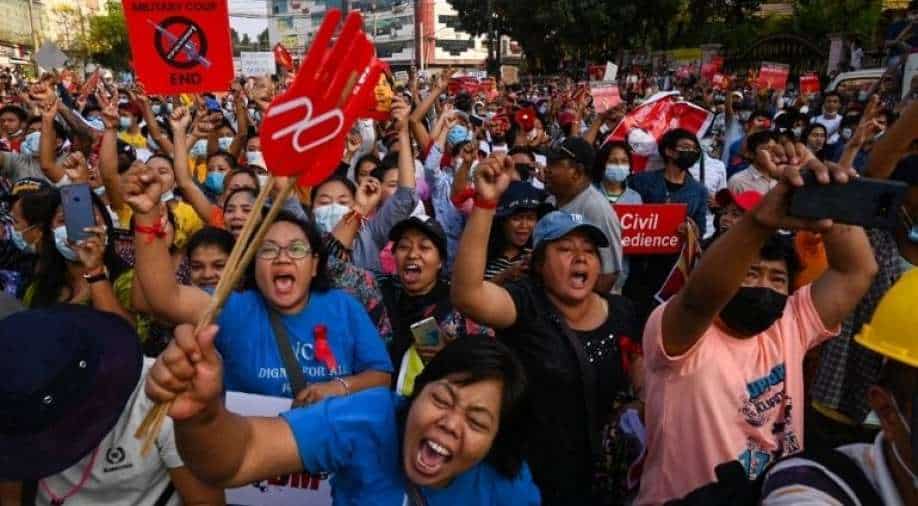 Protesters take part in a demonstration against the military coup in front of the National League for Democracy (NLD) office in Yangon on Monday. Photograph:( AFP )

In a stern warning to the anti-coup protesters, Myanmar's military said the agitators could face up to 20 years in prison if they obstruct the armed forces anywhere across the country.

Long sentences and fines will also apply to those found to incite 'hatred or contempt' towards the coup leaders, the military said. The legal changes were announced as armoured vehicles appeared on the streets of several cities, the BBC reported on Monday.

The media outlet Frontier Myanmar also reported that Myanmar security forces opened fire to disperse protesters in the city of Mandalay on Monday.

The number of casualties was not clear, it said. According to a member of a student union in the city, some people were wounded.

Hundreds of thousands of people have taken part in protests in recent days.

The demonstrators are demanding the release from detention of their elected leaders, including Aung San Suu Kyi, and the restoration of democracy.

On Monday, Suu Kyi's lawyer said she would be detained for a further two days. She will then be tried via video link at a court in the capital Nay Pyi Taw on Wednesday, Khin Maung Zaw added.

Suu Kyi was rounded up with other members of the government on February 1, but her detention was due to end on February 15.

The charges against her include possession of unlawful communication devices - walkie-talkies used by her security staff.

Her party was elected in a resounding victory last November, but the military has alleged voter fraud without providing proof.

The military's heightened presence is the latest sign of a potential crackdown on opposition to the coup.

The ruling junta has also announced a series of legal changes, imposing long prison sentences and fines on anyone found to incite hatred towards the military, 'by words, either spoken or written, or by signs, or by visible representation'.

In a statement posted on a military website on Monday, it said that people preventing the security forces from carrying out their duties could face seven years in jail, while those found to stir up fear or unrest in the public could be imprisoned for three years.

The news came hours after the Internet was restored.