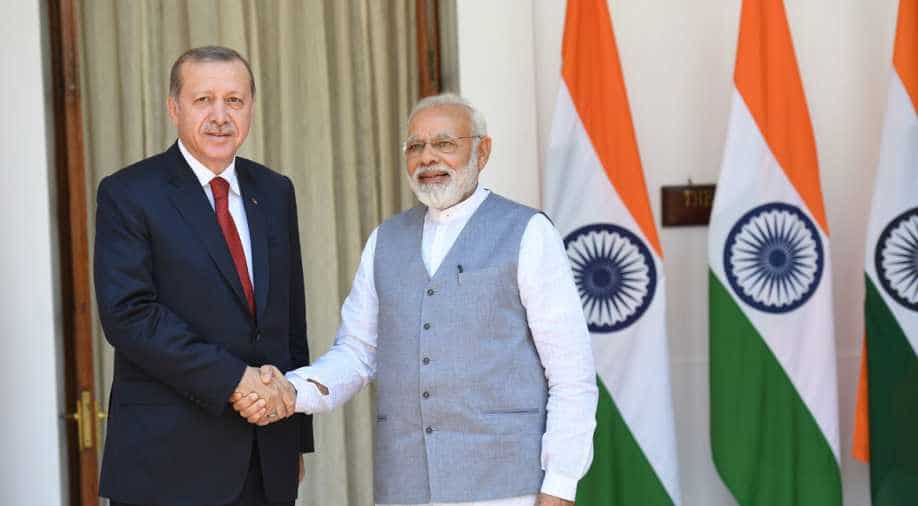 Turkey's $6.5 billion annual trade volume with India is "not enough" and should be boosted, said Erdogan, who arrived in India on a two-day visit on Sunday.

In a joint statement, the two countries agreed to encourage business efforts to achieve a level of at least USD 10 billion by 2020.

The Modi-Erdogan meeting came under the backdrop of the Turkish president's comments on Kashmir, made during his interview to WION ahead of his visit to India. (Also Read: Kashmir a bilateral issue: India to Turkey)

Erdogan had said, "We should not allow more casualties to occur (in Kashmir). By having a multilateral dialogue, (in which) we can be involved, we can seek ways to settle the issue once and for all."

Asked if the Kashmir issue or Erdogan's proposal of multilateral dialogue figured during the meeting between the two leaders, External Affairs Ministry Spokesperson Gopal Baglay said India had made it clear to Erdogan that Kashmir was a bilateral issue and linked with the problem of cross-border terrorism.

"We told them that we have been victims of cross-border terrorism and and state-sponsored terrorism for 40 years. As far as Kashmir issue is concerned, we have always been ready to resolve it with Pakistan. Not only Kashmir but also all other bilateral issues should be resolved in a peaceful manner," Baglay said.

The two countries strongly condemned the "use of double standards" in combating terrorism, declaring in a joint statement "that there could be no justification for terrorism anywhere".

Erdogan and Modi called upon all the countries to work sincerely to disrupt terrorist networks and their financing and stop cross-border movement of terrorists, in an obvious reference to Pakistan-based terrorist groups.

The two agreed to strengthen cooperation in effectively dealing with terrorism at the bilateral and multi-lateral levels.

Turkey has been maintaining that the NSG should come out with a system to consider the entry of countries which are not signatory to the Nuclear Non-Proliferation Treaty (NPT). It has also supported Pakistan's case for NSG membership.

The heads of government stressed on the need for a comprehensive reform of the UN including expansion of its Security Council to make the body more inclusive, accountable and effective.

This is not a healthy sign. We need a fair and just world order by bringing in significant reforms in the UNSC," Erdogan said

The two also expressed their willingness to improve cooperation in the fields of hydrocarbons, renewable energy (solar and wind) and energy efficiency.

A number of MoUs were signed including one between Telecom Regulatory Authority of India (TRAI), India and Information and Communication Technologies Authority (ICTA), Turkey.

Another agreement for cooperation was signed between Press Trust of India (PTI) and Anadolu Agency (AA) of Turkey.

Erdogan received an honourary degree on Monday from Jamia Millia Islamia, one of India's top universities that teaches the Turkish language.

The Turkish President extended invitations to President Pranab Mukherjee and to PM Modi for visiting Turkey at mutually convenient time.