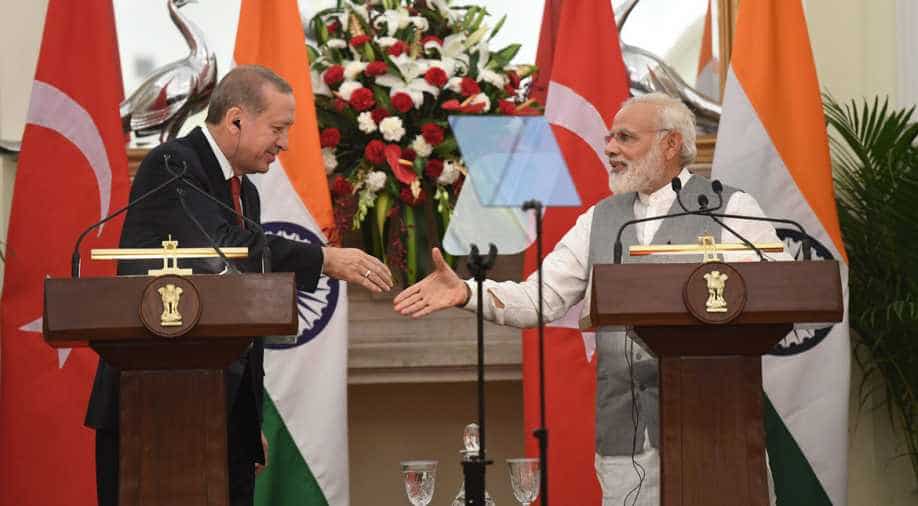 Turkey's President Erdogan and Indian PM Modi at a joint news conference in New Delhi on May 1. Photograph:( AFP )

Turkish President Recep Tayyip Erdogan Monday supported India's bid for a permanent seat in the United Nations Security Council, even as he called for major reforms in the exclusive body.

He said that India-Turkey relations are "significantly behind" their potential and for a fair world both countries have to work together.

This is not a healthy sign. We need a fair and just world order by bringing in significant reforms in the UNSC," Erdogan said here.

The membership of the body should be on a rotational basis with 20 to 30 countries holding the mantle at a time so that all nations get a chance to be a member of the key world body, he said.

"Only five permanent members (the US, Russia, France, China and the UK) have veto power in the UNSC. The non- permanent members' vote does not count. (Then) why do they deceive (the world)? The UNSC cannot dispense justice," the Turkish President said.

Referring to the ongoing fight against the IS, the crisis in Syria and countries like the US, Russia and Iran supporting different groups in the region, Erdogan said using one terrorist organisation against another can be counter- productive.

Noting that there are "differences" as well as "commonalities" between the two countries, India and Turkey must "quash" prejudices against each other, he said.

Erdogan, who is on a two-day visit to India, was speaking in Turkish at the Jamia Millia Islamia university where he was awarded a Doctor of Letters degree.

However, earlier there was opposition from a section of students over honouring Erdogan alleging "he is involved in blatant human rights violation and has become a dictator in Turkey".

Erdogan said the existing global order was "shying away" from dealing with those violating human rights, as he attacked his Syrian counterpart Bashar al-Assad.

Lashing out at IS, Erdogan said the terrorist group is "blasphemy" in the name of Islam and has no connection with the religion.

"Terrorism can only be fought by tackling poverty and inequality. It will be unfair to blame religion for terrorism," he said.

Erdogan also urged Indians not to view Turkey from the "prism" of the western media.

Erdogan also blamed the world community for not doing much while his country was fighting IS with full commitment.

He said, Turkey shares a nearly 900 km border with Syria and has accommodated nearly three million Syrian refugees, spending over USD 25 billion on this.

"Yet, the global players are not ready to share the responsibility. The European Union promised USD 3 billion, but has only given USD 750 million," the Turkish president said.

Asserting that he was the only world leader to have visited Somalia, Erdogan said no other leader has visited the terror-hit African nation.