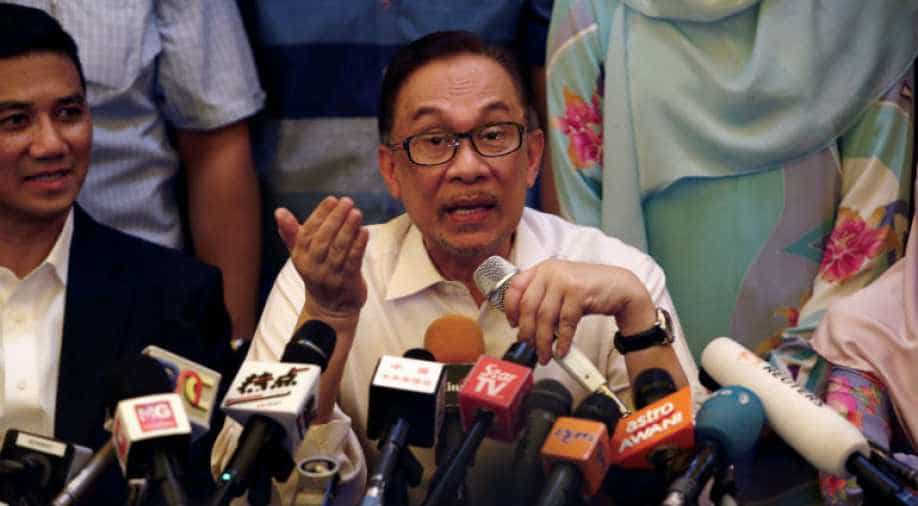 Anwar Ibrahim, a controversial figure in Malaysian politics, was freed on Wednesday after pardon from King Sultan Muhammad V. Anwar was sentenced to five-year jail term for sodomy, a charge he says was trumped up by the government of ousted Prime Minister Najib Razak. This was the second time Anwar was jailed he was first convicted of sodomy in 2002.

Who is Anwar Ibrahim

Anwar first rose to prominence in the 1970s as a radical Islamic student leader, taking part in protests over rural hunger that earned the first of his three jailings by Malaysia's authoritarian regime. He was held for 20 months under a draconian security law.

But he later shocked many associates by joining the ruling United Malays National Organisation (UMNO), and eventually caught the eye of Mahathir, the tough leader who dominated politics from 1981 to 2003 and has continued to exert formidable influence.

Anwar enjoyed a meteoric rise in the now-ousted Barisan Nasional (BN) coalition. Anwar headed various ministries under Mahathir's tutelage in the 1990s, earning praise as a reformer. He eventually became deputy prime minister and Mahathir's presumed successor but fell out with his mentor during the 1998 Asian financial crisis.

Anwar launched the 'Reformasi' movement two decades ago to challenge diverse Malaysia's race- and patronage-based politics. The movement challenged Mahathir's government and within weeks, Anwar was arrested and jailed on charges of sodomy and corruption.

Images at the time of a goateed, bespectacled Anwar in court with a black eye and bruises brought condemnation of Mahathir from around the world.

Anwar's trial became a spectacle, with prosecutors at one stage bringing out what they said was a semen-stained mattress allegedly used when he had sex with two male aides.

After being freed in 2004, Anwar was jailed a second time. Both times, he and his supporters have said the charges were politically motivated.

Anwar was originally jailed 20 years ago by then-premier Mahathir Mohamad, on what supporters insisted were trumped up sodomy charges. He was imprisoned again in 2015 by Najib Razak, the man who was ousted last week in shock polls.

His prison term was scheduled to end on June 8, but Anwar came out of prison early following a pardon from King Sultan Muhammad V after a meeting of the Pardons Board which took into consideration the provisions under Article 42 of the Malaysian Constitution. The pardon was granted on the grounds that there had been a miscarriage of justice.

The deal with Mahathir

Anwar's release caps a remarkable reversal of fortune made possible by the BN's unexpected electoral drubbing a week ago.

The former autocrat Mahathir - who headed BN for 22 years until 2003 - came out of retirement to lead a disparate opposition first assembled by Anwar to a upset victory, fuelled by rising public anger at a massive government corruption scandal under Najib.

Under a pre-election pact, Mahathir, 92, had vowed to enable Anwar's release and eventually step aside for him to become prime minister. On Tuesday, Mahathir said he expected to be prime minister for one or two more years, setting off talk of fresh differences between the two.

He must first be elected to Parliament, having been stripped of his seat in 2015 when his conviction on charges of sodomising a young male aide was upheld on appeal and he went to jail a second time.

Death toll from Peshawar mosque blast rises to 93; another 221 wounded, 57 in critical condition