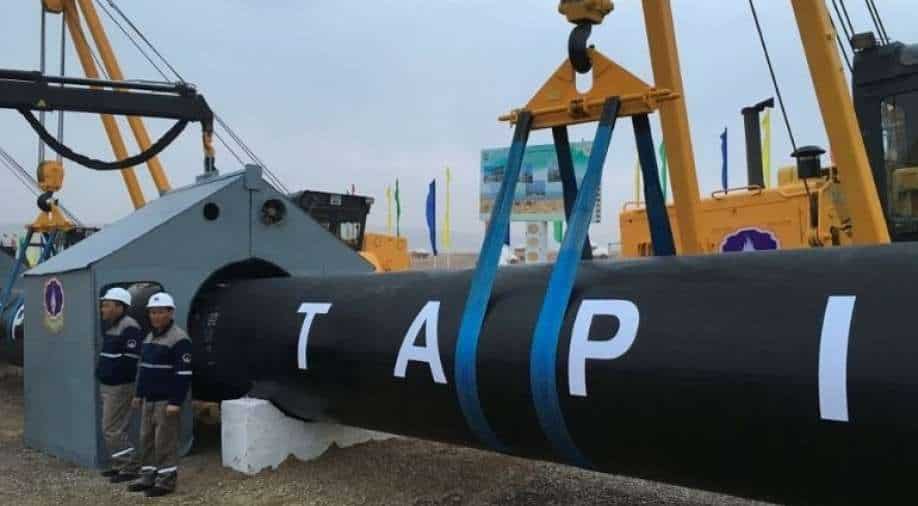 Workers stand near a gas pipe during the launching ceremony of construction work of the TAPI project on the Afghan section of a natural gas pipeline that will link Turkmenistan through Afghanistan to Pakistan and India, near the town of Serhetabat, Turkmenistan (file photo). Photograph:( Reuters )

In what may be termed as one of the first indications of resumption of the ongoing projects, the Taliban regime said the implementation of the Turkmenistan-Afghanistan-Pakistan-India (TAPI) gas pipeline project will start soon in Afghanistan.

At a press conference, Muttaqi said the Turkmenistan delegation and Islamic Emirate held talks on political and economic issues.

The delegation from Turkmenistan included officials of various ministries, who held talks with Islamic Emirate’s officials.

During the two-day visit, both sides discussed several issues to strengthen political relations and economic ties.

Muttaqi said they talked about the Turkmenistan-Afghanistan-Pakistan-India (TAPI) gas pipeline project, whose implementation in Afghanistan will start soon.

“Important issues, such as TAPI, electricity and railroads, were discussed. We discussed how to strengthen the projects, which had already started. Also, the projects that were started by Turkmenistan, such as TAPI, its practical implementation will start soon in Afghanistan,” Muttaqi.

The minister also said Meredov invited him to visit Turkmenistan.