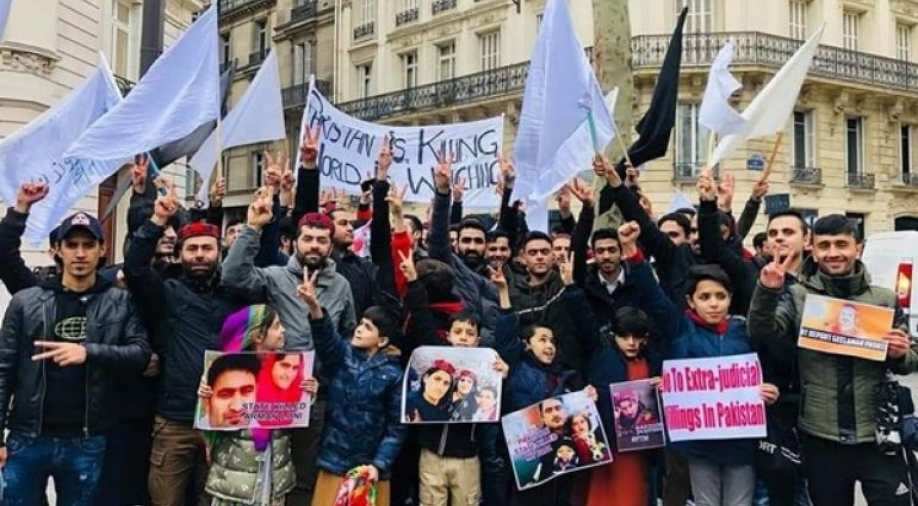 Last month, the leader of the Pashtun Tahaffuz Movement (PTM) Manzoor Pashteen was arrested due to its critiques against the Pakistani government.

Activists and supporters of the Sindhi, Baloch and Pashtun ethnic groups on Tuesday held a protest, condemning Pakistan`s atrocities against minorities and crimes against humanity, outside the United Nations Human Rights Council (UNHRC) headquarters in Geneva.

Protestors gathered at the iconic Broken Chair sculpture in front of the UN Office amidst the ongoing 41st session of the UNHRC to urge the world body to take immediate action against worst forms of rights violations by the Pakistani Army in the Sindh, Balochistan and Pashtun region.

Activists also held up huge posters stating "Pakistan Army Stop Atrocities Against Sindh, Baloch and Pashtun". In the past decade, many mass graves with more than 100 bodies were discovered in Balochistan. Almost 7000 people have been faced with enforced disappearances by the Pakistan Army.

Dozens of villages have been destroyed by the security forces and thousands have been forcibly displaced in Makkuran, Jhalawan, Dera, Bugti, and Kohlu regions of Balochistan. Moreover, the perpetrators have been given immunity by the Pakistani government. Similarly, in Sindh and Pashtun, the Pakistani Army held arbitrary arrests, enforced disappearance, torture, extra-judicial killing, and political repression as a tool to silence their voice and struggle.

Last month, the leader of the Pashtun Tahaffuz Movement (PTM) Manzoor Pashteen was arrested due to its critiques against the Pakistani government.

According to Convention Against Torture and Other Cruel, Inhuman or Degrading Treatment or Punishment, Article 5 of Universal Declaration of Human Rights, Article 7 of International Covenant on Civil and Political Rights, and International Convention for the Protection of All Persons from Enforced Disappearance the violent acts of Pakistan constitute a crime.