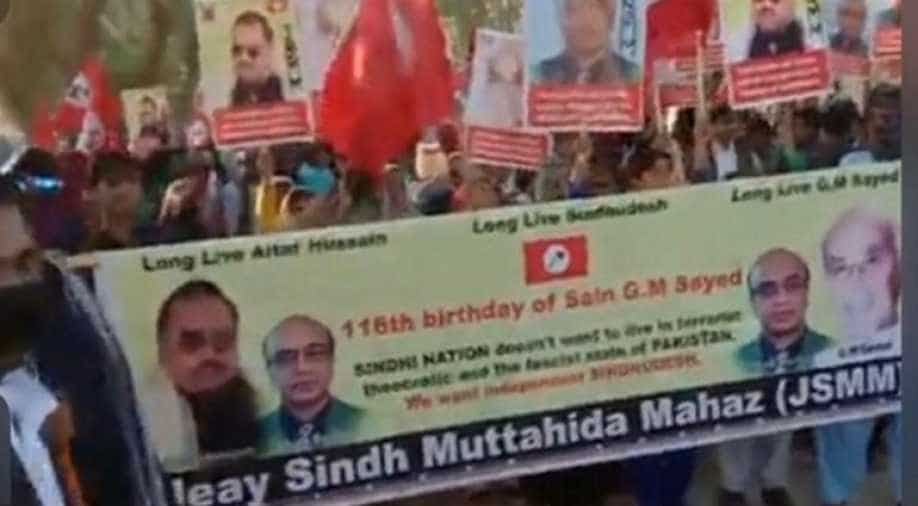 Thousands of workers, office bearers and supporters of JSMM, JSQM, MQM and other nationalist organisations reached the grave of Syed in his home town Sann, a small town located in Jamshoro District of Sindh Province.

Participants of these rallies were holding the flags of Jeye Sindh and the portraits of late GM Syed, leader of JSMM Shafi Burfat and Altaf Hussain, the founder and leader of MQM. They were holding the main banner in which the pictures of GM Syed, Shafi Burfat and Altaf Hussain were printed. The banner said, "The Sindhi nation do not want to live in a terrorist, theocratic and a fascist state of Pakistan".

Founder and leader of MQM, Altaf Hussain had appealed to the Sindhis and Mohajirs to celebrate the birthday of late G M Syed in great numbers and to pay tribute to him.

The official twitter account of JSMM posted this on the day: "Chairman BNM Khalil Baloch;The great interest of Baloch and Sindhi requires that we look for a common form of struggle against this brutal enemy so as to unite and fight the enemy, to defeat the enemy with the power of cooperation and solidarity in the world beyond the mainland and beyond."

Participants of rallies were raising slogans in favour of GM Syed, Shafi Burfat, Altaf Hussain and slain leader of JSQM, Bashir Qureshi. They were chanting slogans "We want Freedom", "Down with Pakistan", "Down with Army", "GM Syed our leader and Sindhu Desh is our fate", "Tuhunjo Desh mohunjo Desh.. Sindhu Desh" (your desh and my Desh...Sindhu Desh), "Altaf Bhai qadam badhao...hum tumhare saath hain".

GM Syed was the architect of "Jiy-e-Sindh" movement, aimed at achieving Sindhudesh. He was also the author of more than 60 books, (with) subjects ranging from politics, religion, culture, literature and commentaries on famous poet Shah Abdul Latif Bhitai. He was a political thinker, literary figure and mystic. He dominated the political arena of pre and post-partition era for decades, while he remained in jail for 30 years.
GM Syed was put under house arrest; his house was declared a sub-jail. He died on April 25, 1995.