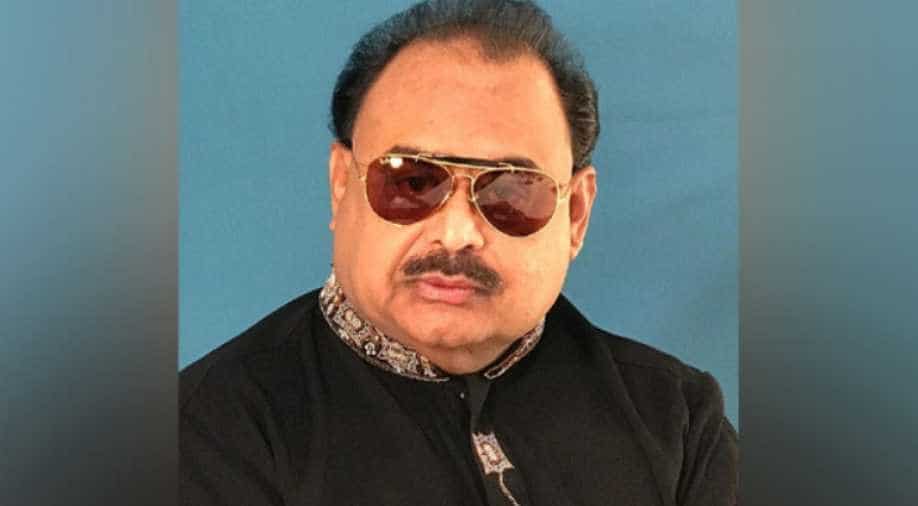 The MQM's founder has now demanded the right for the self-determination in Pakistan under the aegis of the UN.

In a significant development, the leader of the Mohajir Qaumi Movement or MQM, Altaf Hussain, has called for self-determination for the Mohajir people - virtually signalling a plan to break away from Pakistan.

The MQM said that Pakistan's Military repressive actions date back to decades and the non-Punjabi nations like Baloch, Pashtuns, Sindhis and Kashmiris, settled in different provinces of the country, are forced to live like slaves and have been facing genocide. The organisation further said that these nations have been completely irked and now want freedom from Punjabi establishment's repressive dominance.

The political faction also said that the Mohajirs, in particular, are fully repressed, being restricted from involvement in politics and welfare acts. They allege that both MQM, their representative party, and Hussain, their leader, are being placed under an embargo.

The MQM's founder has now demanded the right for the self-determination in Pakistan under the aegis of the UN.

He has also invited other oppressed "nations", like the Pashtun, the Baloch and others to join him in the demand for the right of self-determination. Hussain outlined that he is not eager to lead the movement, stating that anybody from the "oppressed nations" could choose to be the leader of the movement for self-determination.

He further called on countries like the UK, USA, France, Australia, Germany and others to cease giving aid to Pakistan because it provides sanctuary to terrorism.

In his special message to the international community, Hussain said, "I appeal to the United Nations Secretary-General, Amnesty International, Human Rights Watch, and all renowned Human Rights Organisations worldwide to take heed of my words."

He said he would like to draw their attention to the draconian measures being carried out against the Mohajirs, Pashtuns and Balochs living in Pakistan, the "humiliation being carried out by the Pakistan Army, ISI, Rangers, Police and civil-dressed officers during the illegal raids and abductions tantamount to criminal offence". "The inhumane torture being inflicted upon the Mohajirs, Pashtuns and Balochs, and then ultimately subjecting them to enforced disappearances, their family members, including their women, young children and the elderly are not even spared by the brutal forces of Pakistan," he added.

"This outdated measure of draconian torture, illegal raids, arbitrary detentions, are all carried out by the ruthless deep state. No respect is afforded to the families or victims, every member of the family is targeted without due legal process, no legal warrant or permission from any judicial authority is produced before they carry out these illegal actions," he said.

Hussain also mentioned that once abducted, the families do not even know if their loved ones are alive or dead. No authority co-operates with them and bodies are found in the suburban areas where they are killed and dumped. The bodies bear marks of inhumane suffering and the affected families fear every day that one of the bodies dumped so could be of their loved one, according to him.

Since 2013, over 15,000 Mohajir, Pashtun and Baloch office-bearers, workers and sympathisers have been the subject of enforced disappearances and sadly, none as yet has been held accountable for these abductions, Hussain stated.

He put forth that this is a blatant violation of human rights. "Pakistan is besieged by the Pakistani Army, ISI, Rangers and Police and this country has lost control and is currently in the phase of an undeclared martial law, where freedom of expression, freedom of speech or freedom to associate themselves to any political party of their choice is infringed upon," the MQM leader remarked.

He said that if a journalist expresses his concern over these violations and dares to cover the story, he will have only two options - either he will be told by the deep state to stop or his body will be found in a suburban area.

He requested all democratic countries, which provide assistance, and have afforded Pakistan a GSP+ status in the form of preferential support, to halt all funds until they send their representatives to enquire into these gross violations of human rights against the Mohajirs, Pashtuns and Balochs and approach those innocent civilians who have been the subject of these violations and their lives have been destroyed, and hold Pakistan accountable to their commitment to ensure that human rights are not violated.

He said, "I want to mention a few prime examples of the illegal abductions carried out by the deep state, a progressive, leader Momin Khan Momin, whose plight has been raised by Amnesty International."

He highlighted that Khan is frail and is undergoing cancer treatment. He was abducted with his son in the early hours of 31st January at 4 a.m., In this context, look at the tweets of South Asia Amnesty representative Rabia Mehmood. His only crime was his affiliation with the MQM, Hussain opined.

Furthermore, in 2018, Hassan Zafar Arif, a PhD from Harvard University was abducted and taken to the torture chamber of the ISI and Army, Hussian said. He was murdered due to the torture in custody; his body was dumped in the suburban areas of Karachi. Similarly, Naqeeb Allah Mehsud and three of his colleagues were abducted by the militaries henchmen Rao Anwar. He was brutally murdered. Conversely, Syed Ali Raza Abidi, who was MQM designee, was murdered on Christmas Eve 2018, Hussain put forth.

He said that he could not explain in detail, but if the democratic countries of the world might send their rapporteurs, they can enquire with the women of the Mohajir community about how their chastity and respect was desecrated by the Army. The Deep State has started the same illegal acts it carried out against the Bengalis in 1970, he remarked.

He said that he has faith and hope, that as democratic countries they will raise the voice of those going unheard or else the failure will result in annihilation. He also requested on an 'SOS basis' to intervene and help the helpless Mohajirs, Pashtuns and Balochs.

Mohajirs have no choice but to seek the assistance of the international community, and demand that a UN referendum be held in the urban areas of Sindh, Balochistan, and Khyber Pakhtunkhwa and let the people decide if they want to live under the occupation of Pakistan's demonic army and deep state or not, Hussian outlined.

"They have suffered from the genocidal actions of the ghoulish Pakistan army since past 71 years and they now want to live free from danger and that they want a right to self-determination. The UN should take immediate action on the appeals of millions of Mohajirs, Balochs and Pashtuns to fulfil this justified demand as mentioned in the UN charter," Hussain appealed.

There is only one MQM and that is the one founded by him in 1978 as APMSO as a student wing, then progressed to the Mohajir Qaumi Movement and then subsequently to the Muttahidda Qaumi Movement, Hussain said.

He also added that his family home and nearby offices have been illegally sealed by the Army and Deep State and at least 22,000 Mohajirs have been extra-judicially killed through brutal draconian style torture techniques.

He said that during raids it has become a normal practice of the day to treat the elderly and women disgracefully, not only beat them but desecrate their private life, it is a common routine to abuse and molest women.

In this situation, when the constitution of Pakistan and Judiciary are not providing any protection to the Mohajirs, what option they have other than to approach the United Nations to seek their right to self-determination, he asked.

He also condemned the discrimination being faced by the Baloch and Pashtuns, who are subjected to enforced disappearances. Similarly, thousands of Balochs have been killed extra-judicially and hundreds of Baloch girls are kidnapped and taken to the military cantonment and then raped, he revealed. In order to save their lives, the Balouch need to raise their voice to seek their right to self-determination. If they would fail to do so, it will only result in further deaths, enforced disappearances and extrajudicial killings, he put forth.