Security beefed up in Bangladesh ahead of polls on Sunday 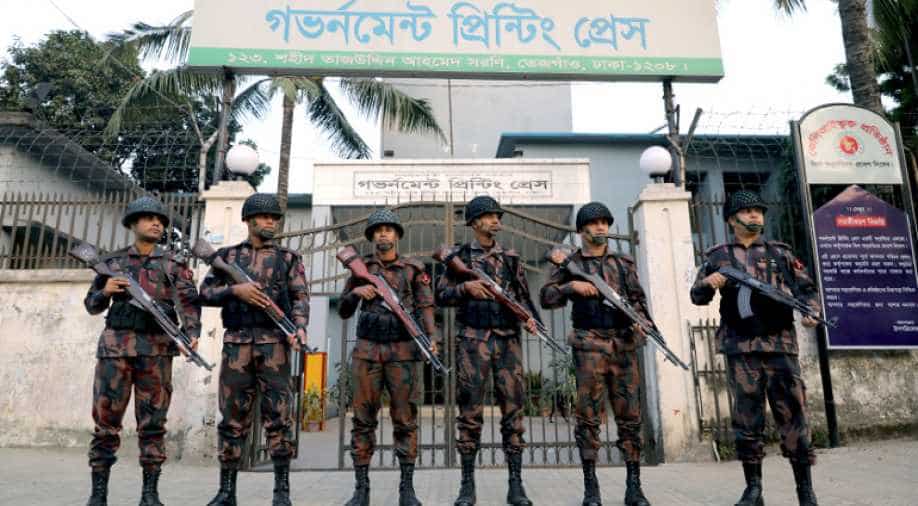 Members of the Border Guard Bangladesh are seen on duty in front of Bangladesh Government Printing Press ahead of the 11th general election. Photograph:( Reuters )

Security forces including Bangladesh Army troops, members of the Rapid Action Battalion (RAB), Border Guard Bangladesh (BGB) are reportedly patrolling the streets and have set up security check-posts over different locations in Dhaka.

As Bangladesh prepares to go for polling on December 30 to elect a new Parliament in the country, armed forces have been deployed in 389 'upazilas' or administrative region till January 2.

Dhaka Tribune reported that the security and law enforcement agencies of the country have unveiled various measures, to ensure an environment free of violence, intimidation and coercion before and after the 11th Parliamentary elections scheduled to be held on Sunday.

Security forces including Bangladesh Army troops, members of the Rapid Action Battalion (RAB), Border Guard Bangladesh (BGB) are reportedly patrolling the streets and have set up security check-posts over different locations in Dhaka.

Meanwhile, the Dhaka Metropolitan Police (DMP) has been given the responsibility of maintaining security and stability before and after the general elections.

Dhaka Tribune quoted the DMP Commissioner Asaduzzaman Mia as saying, "The DMP has already established a well-coordinated and strong security system to make the election free of violence, safe and joyful."

"Our cyber team is working to prevent rumours online. If there is any obstruction, then we will take immediate action. Police also have ensured adequate security arrangements for 14 points from where ballot papers will be forwarded to polling centres," he added.

The DMP has also prohibited the movement of vehicles from Saturday midnight to Sunday midnight apart from emergencies including ambulance services.

The Dhaka police have also confirmed that the people who are travelling to some local or international destinations should carry proper identity proofs and necessary documents with them.

"The traffic department has been directed to take necessary steps," Asaduzzaman noted."

Vehicles will be checked. The measures are to ensure that no one can create disorder and disrupt balloting," he said.