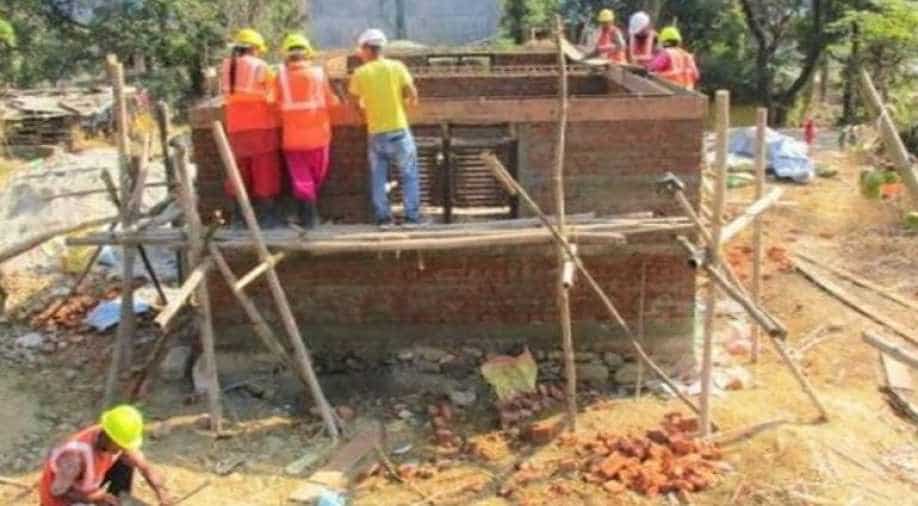 Overcoming the stigma, women are working as masons at a reconstruction site in Gorkha district of Nepal, which was struck by a devastating earthquake in 2015.

Radha Ramtel is among the eight women who are helping in building the earthquake resilient houses after attending training provided by UNDP Nepal which has undertaken the Nepal Housing Reconstruction Project. The project is funded by the Indian government.

"When the earthquake first struck we stayed in the cowshed. Then after we got a tarpaulin and we all locals shared the makeshift house. As tremors hit constantly there was no point in building a house. But later we built a house (temporary) surrounded by tins," Radha Ramtel, resident of Gorkha District, recalled.

It has been four years since the earthquake jolted Nepal. Ramtel and other Gorkha residents have been shifted to newly built houses. The houses are constructed as per regulations laid out by the Nepal government that demands house to be earthquake resilient.

"Earthquake resilient house with two rooms has been built now, there are no worries about the earthquake and is fit to live-in. I have been living in there with my children," Ramtel, a mother of three children who has been supporting her husband financially by working as the mason, further added.

The earthquake of 2015 that shook the Himalayan nation of Nepal claimed nearly 10,000 lives, injuring thousands and displacing over half-a-million people. The epicentre of the earthquake was in Gorkha.

As millions of houses were destroyed, hundreds of families were forced to sleep under the open sky or in temporary settlements which were full of dangers.

The available human resource for reconstruction also was semi-skilled and technically there were a lot of flaws in their work but the training provided under the Nepal Housing Reconstruction Project upskilled them.

"Before being provided training, some of them in earlier times have had attended similar kind of consultation programs. In order to overcome common mistakes they were making we have provided them new kind of training on the site which helped in improving the lapses in the work," Uttam Baniya, site engineer for the Nepal Housing Reconstruction Project underway in Gorkha of Nepal.

A number of women enthusiasts for the reconstruction drive in Gorkha have come forward at their own will. The local body at first had issued a notice inviting application for the training which encouraged women like Radha Ramtel.

Ramtel's husband, who is in driving business, has supported her in getting into construction work. Ramtel's mother-in-law is also in the same business and defied the patriarchal mindset that is deep-rooted in mostly rural areas of Nepal.

The training provided by UNDP not only gave local women an opportunity to learn new skills but has also supported them economically and helped them overcome dependency on their families to meet expenses.

"I had to rely on my husband for small expenses but now I can incur it on my own. I have added on a skill. I have been able to make earthquake-resistant model houses, take care of children on my own and also been able to manage the house expenses on own," Radha further added.

After being exposed to a new profession of building earthquake resilient house Radha Ramtel said that she committed to continue her job as the mason.
The "first thing is that I would continue this profession. Continuation would sharpen me more and I would also give my learning to others," one of the women masons of Gorkha concluded.

The Indian government is supporting the construction of 50,000 houses in Gorkha (26912 beneficiaries) and Nuwakot (23088 beneficiaries) districts of Nepal. The government has appointed UNDP and UNOPS as socio-technical facilitation consultants for Gorkha and Nuwakot district, respectively, in March 2018.

The reconstruction drive initiated by the Government of India with UNDP's consultation in Gorkha district of Nepal has brought happiness for the beneficiaries here.