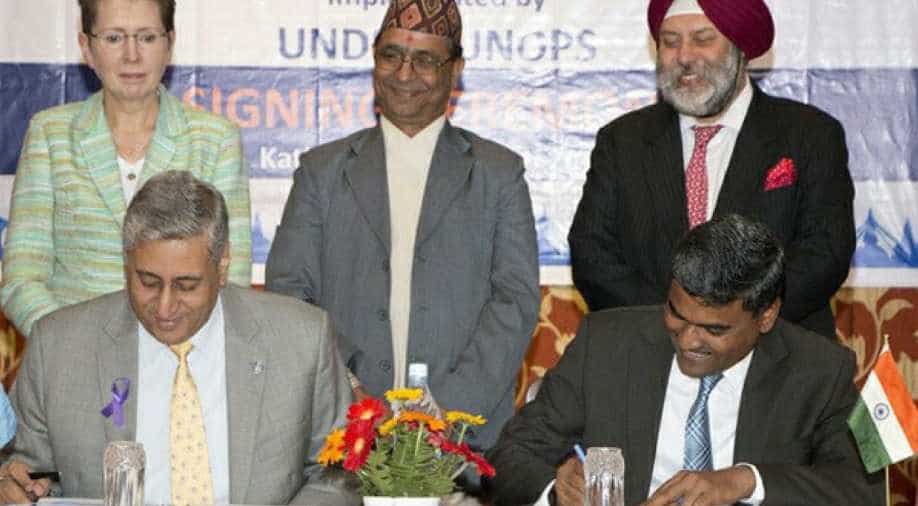 In a reconstruction bid for earthquake-ravaged Nepal, the Government of India has sealed an agreement with United Nations Development Program (UNDP) and United Nations Office for Project Services (UNOPS) to build 50, 000 homes for quake victims.

The agreement signed will provide socio-technical facilitation to the earthquake victims of Gorkha, the epicentre of 2015's earthquake and the Nuwakot district of Nepal.

Sanjay Mathur, Regional Director, UNOPS, said, "It is significant that the Indian Government has decided to partner with the United Nations in this effort between UNOPS and UNDP. We have covered every district affected by the earthquake. We have strong partnerships and have strong relationships with local governments and communities. The close collaboration with the Government of India, Government of Nepal, Provincial and Local Government and with our UNDP partners it is an essential part of this essence of this program."

As per the agreement sealed on Thursday, the United Nations Development Programme (UNDP) will build 26, 912 homeowners in Gorkha and 23, 088 homeowners in Nuwakot Districts of Nepal.

Yuvraj Bhusal, CEO, National Reconstruction Authority, Nepal, said, "The Government of India is the largest donor in this regard, our near, next door neighbor and we are very much grateful to the Government of India and People of India for extending support to the cause of Nepal and Nepalese particularly for the earthquake victims."

Manjeev Singh Puri, Ambassador of India to Nepal, said, "The God, nature and our forefathers have bound us together in a manner perhaps this is not applicable to any other in the world. We all of us do not consider all of this even use the expression which is often claimed today as co-operation, we say this is a partnership we must have side by side solidarity. We must do what we can do for each other and your (Nepal's) prosperity lies gains for me and if I do well you have the right to pick and choose that from me and I think this brings whole life model for the people of India and people in Nepal. So we are very proud of this partnership and we are very very comfortable with this partnership let it be strengthened  and let it be nurtured."

With the implementation of the agreement signed on Thursday a total of 16, 912 households in Gorkha and 23,088 households in Nuwakot will be benefitted.

The earthquake of 2015's April created havoc in Nepal which took the lives of about 10,000 people and 22,300 injuries. Gorkha and the Nuwakot were the districts which had the highest tolls and were enlisted as the "Crisis-hit" 14 districts.