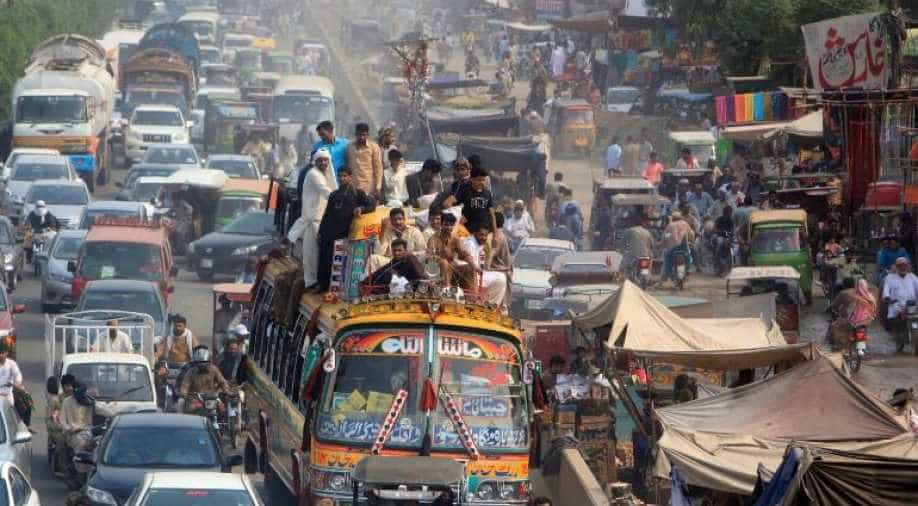 Traffic clogs the roads as people head home ahead of Eid al-Fitr, which marks the end of the holy month of Ramadan in Lahore, Pakistan June 24, 2017 Photograph:( Reuters )

Ghulam Hussain was used to zipping through the streets of Lahore with his wife and three young children perched perilously on his motorbike, whenever they visited relatives or ran errands.

But now that Pakistan has launched a plan to move vehicles over to electric power, Hussain is excited about the prospect of no longer spending 4,000 rupees ($24) each month on petrol.

"It would be a substantial saving for me to switch to an electric motorbike," said Hussain, who works as a driver for a family in the upscale Gulberg district, earning about 20,000 rupees a month.

"Eventually I'd like to buy a small car for the family, as the children are getting older. I would buy an electric car, if they are affordable."

He will have to wait a while to find out.

After a lengthy delay, Pakistan's ambitious electric vehicle (EV) policy was approved for implementation this month, but a late-stage change leaves cars out of its first phase.

Critics warn this means it will take longer for Pakistanis to reap the policy's environmental and financial benefits.

Covering buses and trucks, as well as two- and three-wheel vehicles, including rickshaws and motorcycles, the new policy introduces a raft of incentives to encourage manufacturers to start producing electric vehicles and customers to buy them.

Passed on June 10, the new policy was originally approved by Prime Minister Imran Khan in November, with the goal of cutting air pollution and curbing climate change.

It aims to bring half a million electric motorcycles and rickshaws, along with more than 100,000 electric cars, buses and trucks, into the transportation system over the next five years.

The goal is to have at least 30% of all vehicles running on electricity by 2030.

After pushback from traditional automakers, the first stage of the policy bypasses cars to focus on motorbikes and rickshaws - the most common form of transport in Pakistan's densely populated urban areas - as well as buses and trucks.

Malik Amin Aslam, climate change advisor to the prime minister, told the Thomson Reuters Foundation that incentives for cars would be added to the policy "at a later stage", without specifying when.

Leaving out cars makes the new policy "like a wedding party arriving with no bridegroom", said Shaukat Qureshi, general secretary of the Pakistan Electric Vehicles and Parts Manufacturers and Traders Association (PEVPMTA).

"The rest of the world is adopting this technology and it is pollution-free. The sooner it comes, the better it is for everyone," he said.

Abdul Waheed Khan, director general of the Pakistan Automotive Manufacturers Association, which represents petrol-powered carmakers, told the Thomson Reuters Foundation that the policy "states the broad parameters to which we agreed".

"We appreciate the direction and are awaiting further details," he added.

Hameed confirmed that Sazgar's e-rickshaws will be more expensive than traditional versions, costing about 400,000 rupees, compared with 250,000 rupees for a petrol-powered ride.

However, customers will soon see savings, as their petrol use drops dramatically and they spend less on maintenance like oil and filter changes, he explained.

"Customers could recover the (purchase) cost in one year, according to our estimates," he said.

One potential obstacle to the speedy uptake of EVs is a lack of charging infrastructure. To address that, the policy makes it cheaper for authorities and companies to install charging stations in cities and along motorways.

But Qureshi of the PEVPMTA noted that owners of electric motorbikes, e-rickshaws and small electric cars do not need to wait.

Qureshi worries that leaving cars out of the policy for now will disadvantage lower-income families, estimating that switching to a small electric car could save up to 25,000 rupees a month in fuel costs.

"For many families in Pakistan, this much savings per month means a change in their lifestyles," he said.

Addressing concerns about the cost of electric vehicles, climate advisor Aslam said the policy includes incentives for their owners, such as removing yearly registration fees and a 50% discount on motorway tolls.

In a country where large cities routinely suffer high levels of air pollution, the benefits to Pakistan's environmental health will also be significant, he added.

According to the latest World Air Quality Report, Pakistani and Indian cities dominated the most polluted cities in 2019.

Much of that pollution is due to Pakistan's rapid motorisation, environmental experts say.

A World Bank study published in 2014 noted that the number of vehicles on the country's roads jumped from about 2 million in 1991 to more than 10 million two decades later.

According to Syed Muhammad Abubakar, an independent environmental researcher based in Lahore, the transport sector produces more than 40% of the air pollution in Punjab province.

There is "no time to lose" in cleaning up the air in Pakistan's cities, especially in the midst of COVID-19, he said.

Pointing to a recent study by researchers at Harvard University, Abubakar noted that even a small increase in long-term exposure to air pollution particles can lead to an 8% jump in the rate of deaths caused by the respiratory illness.

"Pakistan must learn and take drastic measures to limit the increase in air pollution. Otherwise, the lives of many will be at risk," he said.